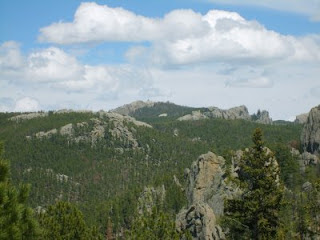 My destination on Thursday would be Jewel Cave National Monument, about an hours drive southwest of Rapid City. My route would take me back by Mt. Rushmore and then on part of the Needles Highway and onto the Peter Norbeck Memorial Scenic Byway. This was a very beautiful drive over probably some of the roughest terrain in the Black Hills and onto the shoulder of Harney Peak at the border of Custer State Park. Near the highest point of the drive there were wonderfully steep switchbacks, 10moh hairpin turns and sometimes barely wide enough for one car. And all with no guardrails. What fun ! Just make sure you pay attention and have good brakes!

I was a bit worried about going in Jewel Cave because the constant temperature of 49 degrees and I had no jacket but as it turned out, I was glad to finally arrive and get a chance to go inside. This turned out to be the coldest morning yet at 43F and windy. It was a relief to get under ground and warm up. I did have a long sleeve shirt and layered with two t-shirts I was comfortable in the cave . Jewel Cave is now listed as being the 2nd largest cave in the world at 142 miles of passages with only Mammoth Cave in Kentucky being larger. New passages are being explored all the time and a few miles more have been added since the brochure was printed at the Visitor's Center.

Most of the cave is dry so there are not as many formations like in a lot of eastern caverns although there are a few very rare formations in some parts of the cave and one in particular that has never been seen anywhere else in the world. Unfortunately they are not accessible to the public. There is one wet area that was very pretty on the tour though and I got some good shots inside. The tour only covers half a mile in 1.25 hours. The rest of the cave would require crawling through passages about 8" x 18" for long periods. They do offer a short tour for those wanting to experience crawling around that can fit through a concrete block on the veranda outside the visitors center. No Thanks. I'd fit but I ain't going .

The area outside of the monument is the location of the biggest fire in modern history of the Black Hills in 2000 and the landscape is obviously still scarred but also much new life is abounding. After leaving the area I headed to the George S. Mickelson Trail for a short run. There is a trail section and parking area in site of Crazy Horse Mountain so I chose that location to get in a little workout. The trail is a converted rail trail from the original CB&Q RR, which later through mergers was the Burlington Northern at the time it was abandoned and turned over to be made into a rail trail.

It was still chilly, about 55F , perfect for a run but very windy too and the grade along this section is fairly steep by railroad standards. I felt ok after the marathon 4 days prior but the legs injuries were noticeable. I actually ran a decent pace; going downhill. As I was finishing up the run there were once again storm clouds brewing and more rain on the drive back to Rapid City.

Here are the days photos
Posted by runjoey at 11:36 AM