5 weeks ago I was afraid to even try running again after having dealt with pain for months and all the failed attempts to start going again. I could not have hoped that things would be going so well with the comeback  this quickly.

Last week I was able to get in 34 miles including a 10 mile run and my pace on all the shorter runs were as good as before the injury !

And then this past week was even better ! I ran 6 days and began adding some strides and surges into some of the runs to prepare for some faster workouts coming soon. I ended up the week with 38 miles with a 12 miler to top off the week. 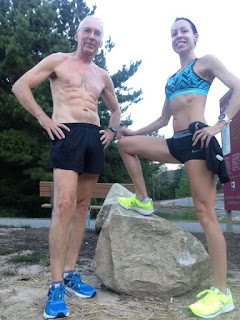 But the best thing was I finally was able to resume Fun Fridays with my amazing training partner Laura ! I wasn't sure that I was really quite ready to handle the pace I need to hang with her but we were ready to give it a shot and it went much better than I could have imagined ! The pace was about 15 to 20 seconds a mile faster than I expected and the effort based on my current condition was definitely tempo pace. We actually had to back off  a little after the 2nd mile ! It was work but I finished knowing I could  go for a bit more. I am looking forward to many more of these runs as I rebuild and go beyond where I was last Spring.

I have big plans for later in the year and everything is right on track.

I would like to give a shout out to Stiner Massage for helping keep me healthy  so I can pursue my lofty goals.
Posted by runjoey at 8:58 PM No comments:

3 weeks after the comeback began and all is well !

Things continue to go very well and even better than I could have imagined after 3 weeks. From  a 2 miler of 1 minute run walk intervals I am now running at my normal  easy training pace.

I was able to run 6 days this week with a 2 mile walk on my rest day.  Two 6 milers and on Friday I went the longest distance so far at 8 miles and still no pain issues. and of course this is all in the miserable humid conditions of August in NC. I never expected to be this far along as I finished up with a 32 mile week !

I am lookng forward to continuing to slowly build back up to  my normal 50 ish miles per week over the next few weeks and maybe, just maybe there is still a chance for a decent race sometime this Fall.

Posted by runjoey at 9:09 PM No comments:

Training update 8-10-15 or hopping down the comeback trail

The picture was taken  just after finishing my first non stop run last Sunday, a 3 miler. Giving thanks for finally being back on the road. 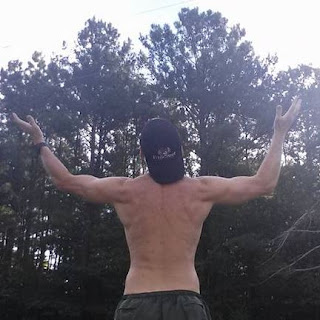 I am very pleased with the progress so far. After that first non stop run I have been able to drop any walk breaks .  I took off Monday and  just did a 2 mile walk and then ran 3 days in a row, feeling stronger each day. Went for another 2 mile walk on Friday.

On Saturday I decided to try for 6 miles. I was feeling a bit tired on the hills but oterwise no problems and a decent pace. I thought about resting Sunday am but woke up feeling very good so I went out for a 3 miler. Decided to test the legs a bit and laid down a 7:35 mile two ! I was sucking wind but it felt so good ! I ended up with 20 miles for the week and still no pain while running.
The legs are doing great but I am still feeling it with my breathing and the heart rate is a bit higher than normal but I am sure I'll get that back in shape quickly. What amazes me is I am already averaging about the same pace for these easy runs as I was 3 months ago ! Now I just have to be careful as I slowly build the mileage bac up to pre-injury levels.

Thanks for caring and stay tuned. Big stuff coming !
Posted by runjoey at 9:28 PM No comments:

After re-injuring the not healed injury at Western States. I promised myself I would not even try to run again until I had several days of no pain doing normal everyday stuff.

Over the weeks I kept up with the core, body weights and free weights on a regular basis but otherwise tried to be very careful not to do anything to aggravate the  injured area which is kind of hard with a hamstring/glute issue.

I was surprised how quickly the trauma I inflicted on it at WS startd feeling better but then it became frustrating. I would have a day or two of hardly any pain at all and then it would seem to be just as bad as before. This  pattern would repeat for the next 3 weeks but each time I had a few good days it would hurt again but I did feel like it was feeling a lot better on the good days and not as bad on the bad days.

So after exactly 4 weeks  and a few good days I decided it was time for a test on Sunday July 26th. I began by walking 1/2 mile and then alternating one minute of running and one minute of walking. I was prepared to bail and walk home at the first sign of pain but I was thrilled to complete 2 miles with no pain at all.

On Monday I went for a 2 mile walk and then Tuesday I went back out this time walking 1/4 mile and then alternating 2 minute run with one minute of walking. Again no pain !

On Saturday I eliminated the walk at the start and then did 4 minutes of running with one of walking for a total of 4 miles ! I was so happy to go that far and be pain free !

That night Laura messaged me and asked if I was going to run again on Sunday. I had planned to walk again but it depended on how I felt in the morning.

Well, I had a good night and woke up feeling good so I decided to give it a real test. Back to back runs and this time no walk breaks. Success ! 3 miles non stop and pain free. The hip felt more stable than it had since before the injury started back in April ! And the pace was decent with the last mile at my pre injury easy run pace.

So, I am so happy to be able to get back to running some but I am going to take my time building back up to normal. I really don't want to take another step back. I love this stuff too much and really don't want to ruin a chance for some strong running in the Fall so today I just walked again.

Stay tuned and hope for more good news soon.
Posted by runjoey at 9:00 PM No comments: