Well, its been over 12 weeks since I last ran and so I haven't had the desire to post an update on the non training. But lets catch up.

Turns out I had what the consensus says was a stress fracture of the heel and along with it a lot of damage to the soft tissue around it mostly in the inside and arch area. Very painful when I finally was forced to stop.  I was told to expect at least 3 or 4 months for healing but maybe lucky with just 2 months. It did finally start to feel better after about 8 weeks but not completely pain free and it would seem to flare up at times so I was being cautious. 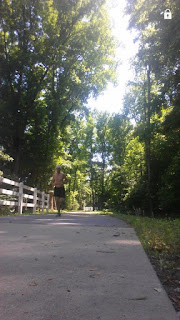 Today, 5-20-17, I finally felt that it would be good for a test. 91 degrees when I stopped by the greenway on the way home but the heat wasn't an issue since I was only planning a mile. I was a bit scared that I would be disappointed but then was so  relieved when the was no pain !  I ran a mile and felt much better than expected and the pace was a decent 9:33. I then walked a mile back and now hours later everything seems the same as before the test.

Well, what have I been up to in the past 3 months since I couldn't run? Yoga. A lot of yoga !
I bumped up my Bikram Hot classes to at least 5 and usually 6 days a week. On top of that I have been doing an hour of yin yoga 5 or 6 days a week either at home, the gym or some classes that my BFF Laura has been teaching since getting her teaching certification in Feb.   I've seen some huge improvement in flexibility and mobility. 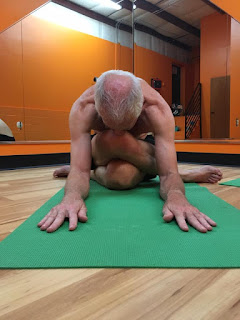 I am still doing the weights in the gym a couple of times a week and the body weight stuff the same. I had gotten a little slack with those for a month or so but I"m back on track now.

I've missed all of my planned Spring racing season. A big disappointment, especially since I was in such great shape and winning  a lot but it's time to look forward. I'm going to be patient building up and hopefully by this Fall I can be back in top shape to compete in the Running Journal Grand Prix Series and get a Boston Qualifier too. I was supposed to be racing the Green Bay Marathon tomorrow but thats not happening !

Stay tuned for more updates. Wish me luck on the comeback. Again.
Posted by runjoey at 7:53 PM 1 comment: