Things change so go with the flow

It seems a bit strange to be sitting home this weekend with no race on the calender. For the 1st time since 2005 I am not entered in the Myrtle Beach Marathon and prior to that I had been to Holiday Lake since 2002. But neither one fit the plan for this year with my focus on racing Boston. I am really missing Holiday Lake since it was the site of my first 50K. Even when I started going to MB I could still go and volunteer but then a couple of years ago they started being on the same weekend. This year they happen to be separate again but I am at neither. Another odd thing is that I had not really planned on ever going to MB. I only decided to go in 2005 to pace Karla in her first Marathon a week after I ran the 40 miler at Uwharrie. After that I got talked into trying to qualify for Boston so I targeted MB in 2006 for that attempt. If everything goes to plan next year I will return to Holiday Lake.

So, since I am not racing I'll catch you up on how the training is going. If you read my last race report you know I had a cold the week leading up to it but still had a decent race running only 1.5 minutes slower than at Ocean Isle Beach last month. But then on Monday following the race I was hit with the evil stomach virus that is going around and it knocked me down hard. It took me all week to regain most of my strength but it was until this Wednesday that I finally was able to get back on track with the training. As it turns out if I had to get sick the timing was about right because last week was suppose to be a rest week anyway before moving into the final phase of training. I would prefer to rest some other way.

Anyway, two weeks ago I finished up the speed phase of the training in my modified marathon training plan I put together. Beginning this week with a set of 1/2 mile repeats I have now moved into the stamina phase which will consist of 1/2 mile and mile repeats between now and The Tobacco Road Half Marathon on March 20th. The first workout went very well and tomorrow I will be meeting the ladies for a 20 miler on the ATT race course.

Goldsboro Heart and Sole Half Marathon 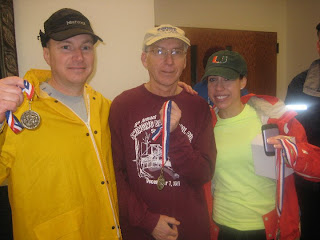 Well, I have to say I'm mostly pleased with the effort this morning. I had been hoping for a better time but considering how yucky I felt all week leading up to this with a rare cold I'm very happy to have run as well as I did.

With the temps in the 30's and a 100% chance of rain in the forecast I wasn't really too excited about running anyway. Drove through a lot of rain on the way but was very happy that it had stopped when I arrived. Just before my arrival I got a voice mail from Lisa saying she would not be coming so I was a bit disappointed she couldn't join in the fun.

I picked up my race number and then saw Laura Frey and John Williamson briefly before heading off to do a warm-up mile. Then I barely made it to the start on time. By my watch they started 3 minutes early. I was just making my way up near the front when all of a sudden they said go so I just relaxed and worked my way up into position and settled in to pace.

I was hoping to average 7:59 pace or better and hit mile one in 8:18. Too slow but no worries. I was relaxed and just gradually piked up the pace. I was feeling pretty good but I could tell my chest was a little tight and I couldn't breathe too deeply. No problem now but as the race wore on I knew this could become an issue. We ran down a bit further and then did a u-turn. This was nice so we could see he rest of the runners in front and behind, but by the end there would be 6 of these u-turns which is a real annoying momentum killer. Saw Laura in 2nd place for the women and around 7th overall and John not too far back int about 12th.

I passed two miles in 7:26. Hmmm, I didn't feel I picked it up that much and was beginning to already wonder about the accuracy of the course. Passed by the first aid station just before 2.5 miles and it was not set up yet with just a case of gatorade bottles sitting there and no cups. I'm glad I don't usually drink in cold weather races less than the marathon. The 3 mile mark came on me suddenly but then I realized it was on the wrong side of the street and facing the wrong way. We had another u-turn just ahead and it was suppose to be facing us after the turn. Passed mile 3 in 7:56 and that felt about right and now I was settled in.

I was getting warm by mile 2 and had removed my vest and gloves and threw them by the road at some volunteers at an intersection. Now I was just cruising along and feeling pretty good. Passed mile 4 in 8:02 and then mile 5 in 8:01. It was obvious now that I would not be running any faster but hopefully I could hold on for a decent time. But then I passed mile 6 in 7:36 and another Hmmm, moment because I didn't feel I had changed my pace at all and with the flat course I can usually tell a difference. They call me the human metronome for my ability to pick and hold a pace. And then mile 7 was an 8:17 and I knew something was wrong because I'm sure my pace the last 3 miles had been very even.

Mile 8 was 8:38 and I was getting mad now. No way my pace was changing like this. I may be gradually slowing some but not these wild fluctuations. And now it started to rain, slowly at first but within a few minutes it was coming down pretty hard. Passed mile 9 in 8:32 and then mile 10 in 9:32. I just threw up my hands in dis-belief. Now freakin way I just ran that slow. I know I was still moving at at least 8:30 pace. Now I was getting really mad and my desire to push the pace had waned. How long is the race going to end up actually being?

I decided to just keep plugging along. By now I didn't care what the time was knowing what ever it would be screwed up. It's really hard to pace when the feedback is so out of line but at least I was still getting in a good hard workout. but really the only reason I didn't just coast it in was because it was still a race and I was still hoping that I may still place in my age group.

I passed mile 11 in a ridiculous 10:24. Now I was soaked , cold and ready to get this over with. Well, the next mile I had an amazing resurgence and ran it in 5:50. Yeah, right. I haven't run a sub 6 mile in 20 years. Just cruised it in and got my finish time and went straight to my car to change out of the wet clothes and get warm.

Warm and dry I made my way over to the community building to wait with John and Laura for the awards. Laura held on for 2nd woman overall. John was first master overall and I was surprised to find I had won my age group. There were several men I had noticed in front of me that looked like they may have been my age but they turned out to be younger.

Now I hope to recover completely from the cold and continue with the training. Next up will be a 5 k test on March 5th. 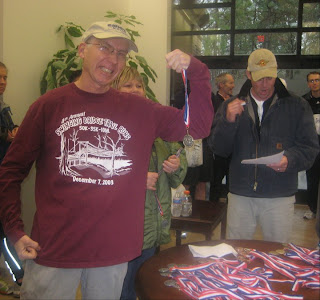 Getting ready for a cold rainy race

Yes, tomorrow morning I am suppose to be racing in the 1st Goldsboro Heart and Sole Half Marathon and right now the weather report is for a start in the 30's and rain. Boooooooo !

This is the 2nd in a series of three halves I had planned in 4 week intervals in my training and build-up to Boston. I was really hoping for some nice weather to make up for the windstorm that Ocean Isle Beach turned out to be but not so lucky. I guess I'll just plan on being cold and miserable for a couple of hours and hopefully run well anyway. Running well also depends on just how well I'm feeling. I have been dealing with a rare cold most of this week. I almost never get sick and when i do come down with the occasional cold it hardly seems to affect me but this one got pretty rough for a couple of days with some fever and chills to go along with the other usual symptoms. Fortunately I am feeling much better today and it never really moved into my lungs.

I chose to enter this raced for a couple of reasons. The first being that that I wanted to get in a few hard efforts at the 13.1 mile distance in my Boston preparation. Second was that the timing fit my schedule perfectly. 3rd was the location. It's flat, fast and only an hours drive away so no overnight stay was needed and since I was born in Goldsboro so it gives me a good reason to go and visit family while I'm there. Also planning on eating post-race at Wilburs BBQ , the finest in the world for lunch.

My training partner Lisa will be running as well as Laura Frey and John Williamson,all of which ran at Ocean Isle Beach. We all have the same goal of running faster this month ! And we're all hoping for age group awards this time. I missed by one place last month. Karla was planning to run it but she has still not gotten back far enough from her foot injury to join in the fun just yet.

Wish us luck and a break in the weather !
Posted by runjoey at 4:29 PM 1 comment: