This is a short story I wrote in April 2005 after pacing at the Umstead 100 miler on the back of a scrap sheet of paper. It was a rough draft and I never finished it and now I don't know where it is so I am re-writing now while I sit here in front of my computer. Hope you enjoy it.

He was a mostly normal boy who enjoyed doing normal boy things. But even at an early age he could sense that he was a little different from most of his friends and although he enjoyed playing with others, he enjoyed spending time alone with his thoughts. Many hours were spent in the woods behind his home, sometimes just sitting in a tree thinking.

And he loved to read. He was quite good at reading at an early age and although the school library only allowed two books at a time to be checked out, they made an exception for him and allowed him to take home three at a time. History, biography, science, mystery, fantasy and fiction were all pored over and absorbed to feed his voracious appetite for knowledge, entertainment and yes, escapism. His favorite books were of the fantasy genre, especially those having to do with knights and dragons and brave, adventurous deeds. He was mostly a happy child, but a part of him always felt there was something more out there and he was afraid he was missing out on it.

After a while it was becoming harder to find books that would be of interest that he had not already read in the school library so one day, not having much luck finding anything of interest, he appealed to the librarian for help. She replied, yes I think I have just the book that you are looking for. She went to a nearby closet and returned with an old dust covered book that obviously had not been touched for years. As she handed the book to him, he cast a skeptical look her way. The title was " The Lonely Princess". Yes, he did enjoy reading of castle's and kings and knights in shining armor, but this looked like a girly book to him. The librarian insisted that he give it a look so he stuffed it into his book bag and went to class.

There the book stayed for several days until boredom led him to retrieve the book and give it a look. Just as he suspected, there were no jousting knights or dragons to be fought in the book but what he did find was a story more compelling than he could have imagined and it became his favorite book, one that would be read and re-read over and over again.

It was the story of a beautiful young Princess who was mostly normal. But she was not content to sit around in the castle looking pretty. She had a yearning for adventure that needed to be fed. All of her court could not understand why she couldn't be happy like a normal Princess would be. She had all the finest clothes, jewelry and people waiting on her hand and foot.  But she was not happy. She felt there was something more out there and she was missing it. She dreamed of leaving the castle and seeing the world, seeking adventure and slaying her own dragons.

So one day she slipped out the castle , into the forest and began to run. And it felt good. So the next day she ran again only further. And soon she was spending nearly all day just running. Through running she was finding the freedom and adventure she needed . Of course the King and Queen didn't understand her strange behavior and tried to discourage her but this only made her desire to run even stronger. She didn't understand it either. She wished that she could explain but it was no use. So she just ran and ran.

Years past by and the boy grew into a man. The book was packed away and over the years became a distant memory. And life began to take it's toll on the man. But even through all the hardships he still dreamed of adventures and exotic locations even though he knew that's all they were. Dreams.

And then one day he stepped out the door and just began to run. And it felt good. So the next day he ran further and then further still. And through running he found something that was missing in his life. His friends and family didn't really understand it. Why the need to run so long and far? He wished he could explain it to them but he wasn't really sure he understood himself. But as he ran he smiled to himself for he knew that long ago and faraway there was a beautiful Princess that understood.
Posted by runjoey at 8:22 PM 6 comments: 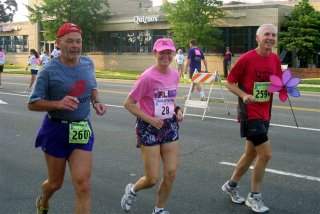 The weekend of Sept 30th/Oct 1st I will be participating in the Hinson Lake 24 hour race in Rockingham NC. The race is being directed by Tom Gabell, a member of the Mangum Track Club of which I am a member. Recently Mike Day suggested that I solicit pledges for my fund raising efforts for Cancer research. As many of you know I tied some of my Spring ultra's to fund raising to benefit the American Cancer Society's Relay for Life, and also the Susan G. Komen Foundation's Race for the Cure in honor of my training partner Karla Werner. The photo is from the RFTC in June. That is our friend Jerry running with us.
For those of you new to the story, you can find the background information in my story "Dreams Can Come True" located on this blog. First let me give you an update on Karla. As of today she has 5 more weeks remaining in chemotherapy. That will be followed by 6 weeks of radiation. She is hoping that her Doctors will allow her to take a break in between so that she can run/walk the Outer Banks Marathon on Nov. 12th. I will be by her side the whole time just as we were together at Boston. If she has the strength and courage to do it, then I will be there to support her. We just ran the Stanley Cup 5k last Sunday an 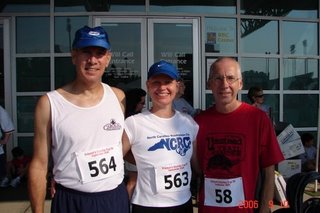 d she did well. I was so proud of her.


This photo was taken there. That is her husband Frank who also ran with us.

Which brings me back to the fundraising. All proceeds will go to the UNC Lineberger Comprehensive Cancer Center's Patient and Family Resource Center. These are the people that have been taking care of Karla's treatments. If you click on the title of this story it will take you to the UNC-LCCC website.
I hope that all of you reading this will consider making a contribution. I do plan to run over 100 miles in this race so keep that in mind. .10 cents a mile or $1 per mile, any amount would be welcome. And if it will help you decide to give, I will be proudly wearing Pink in the race. I invite everyone that is in the area to come down and watch some of the race and run some with me. All checks should be made out to UNC-LCCC. Earmark the funds to go to the Patient and Family Resource Center. You can e-mail me and I will give you my address. just click on my profile at the top of the blog and it will show you my e-mail. For those of you that can't find it in your heart to contribute to anything with UNC in front of it, I will also accept contributions to the Komen Foundation. Thank You for helping in the fight against breast cancer and helping me to honor my friend .
Posted by runjoey at 8:43 PM No comments: