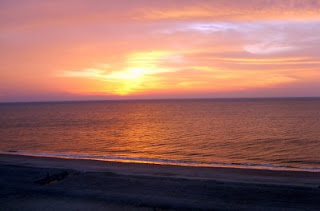 An uneventful but pleasurable drive down to MB on Friday afternoon. It was especially nice driving the Jaguar XK8 convertible, Jerry's wife Lynda's car. Zooooooom !!!! Frank and Karla followed us down and we stopped by the expo as soon as we arrived to pick up our race packets. Saw a few friends but didn't hang around too long before checking in to the Breakers resort and then heading up to the pasta dinner hosted by Mark and Terry Dowd and friends.

4:30 came early on race day but we were happy to find that there was no rain and the temperature was a mild 55F which seemed perfect. We timed our arrival well and only had a short wait before the race begin just before sunrise. All four of us came here not in the best condition and were just hoping to get through the race in decent shape in a reasonable time and not hurt anything in the process. Frank went to join the half-marathoners while Karla, Jerry and I found a spot in the middle for our race.

Our plan was to just start out easy and then taper off so at the gun we eased out onto the course, not worrying about the time as we crossed the early mile markers. Jerry was planning to run with us as long as he could so the three of us were having a good time enjoying the near perfect morning.

By the 6 mile point, I was not feeling bad but I sure wasn't feeling as good as I hoped that early but I wasn't too worried about it just yet. Things change in a race this long so I just tried to relax and settle in for a long day. Jerry was starting to feel very good and by 9 miles he begin to pull away from Karla and I, so we just let him go and stuck to our pace and plan. We went through the half in 2:11 which was very close to the pace we were hoping to hold for the race but I actually wasn't too confident at that point. Already my legs were a bit achy and tired and my energy level was a bit flat. I didn't say anything to Karla but I was expecting that by 16-18 miles I would have to start doing some walking. I was hoping she was feeling better than me. 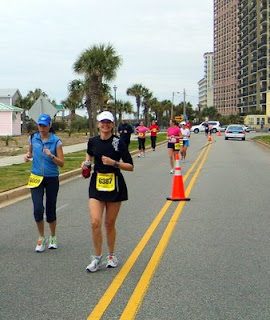 Things stayed the same for the next several miles but by 17 we were slowing down each mile and Karla was beginning to show signs of fatigue too. I almost had the urge to walk at 19 as we crested "MT Myrtle" but we kept trudging along. By mile 20 I commented to her that I was actually feeling better overall than I had at 14 except that my hip flexors were tired and sore and that our pace was still getting slower and there was nothing I could do about that. And I was thinking to myself that maybe I was actually going to be able to run this whole thing afterall.

And that was about when the rain started. Just a sprinkle at first but by mile 21 a steady rain as we turned into the slight wind along the highway for the next several miles. But despite the deteriorating conditions and our energy levels sinking, the last few miles were quite special as we used the invisible bond that holds two close friends together to push and pull each other to the end. We crossed the line in 4:33:04 to finish our 9th shared marathon. Although nowhere near our best we were very happy with the time considering the past year and lack of training for us both. It was an improvement by a few minutes from last year and 12 minutes faster than her last marathon. Very encouraging as we both look forward to a much better year of running in 2009.

Jerry would hold on to run a great race actually running the 2nd half faster than the first and Frank finished the half faster than he has run in a long time. Quite a few runners from the MTC and NCRC ran great races and fast times and pr's. And sadly some had disappointing days but overall it was another wonderful day at the Myrtle Beach Marathon. It was especially nice to see my good friends Fred and Susan Dummar afterwards. They are wonderful people and it was so nice to se them if only for a few minutes. Fred ran an outstanding 3:34 as a new masters runner and Susan had a good run in the half with a friend.

Will I be back again next year? I don't know for sure just now. With Boston filling up in January now, you can't count on using MB as a last minute qualifier like I did in 2006. I do love the race and would hate to miss it but there are some other things I'd like to do in February like return to Holiday Lake. We'll see. But one thing for sure, I will look forward to running with the Marathon Princess again soon. ( I've talked her into running the Grandfather Mt.!!)
Posted by runjoey at 7:56 PM No comments: 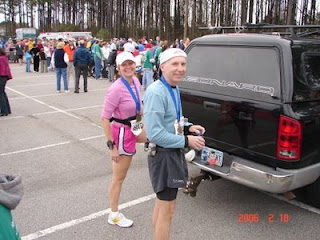 Once again it is time to make the drive down to South Carolina for another Myrtle Beach Marathon. This will be my fifth year in a row running a race that I wasn't sure I would have ever planned to run. It was my friend Jerry that was probably most responsible for getting me to go the first time. Jerry was the one that introduced me to Karla about a year earlier and he told me that she was going to run the 2005 race as her first marathon and attempt to qualify for Boston. Up until that time she and I were only casual acquaintances and had been on one training run with Jerry and Margo and I on New Years. I decided that I would go and run the race with the two of them and handle the pacing duties. I never knew that would be the beginning of this great friendship and training partnership we have shared these past few years.

I am not in very good running shape now due to last years injuries and Karla hasn't been running too much in that time either. Since I began training again at the beginning of the year we have been able to get in some good long runs the past several Saturdays including a few in Umstead. Training is going well but we aren't in shape to race a marathon just yet, so we plan to just run it together for fun and training. This will be the 4th time running it with Karla with 2006 the only year I ran by myself as I was qualifying for Boston that year.

This will be my 27th marathon and 9th running with Karla. If I'm not racing for a fast time I can't think of a better way to enjoy one than running it with Karla or one of my other friends and I look forward to sharing many more thousands of miles. As always there will be a large group of runners from the NCRC and MTC and I look forward to seeing many of them and hopefully some of you my readers. I'll be riding down with Jerry as usual with Frank and Karla following along. Frank will be running the half again.