I ran this race which is located in Downtown Morehead City last and enjoyed it quite a bit so I once again used it as an excuse to visit my friend Stephanie and little Bowie that lives about 30 minutes away. It's a fast course and the locals put on a quality event with that small town feel. They do have a half marathon that actually crosses the sound and over to Fort Macon, hence the name, but the 5k stays in town and runs along flat residential streets. 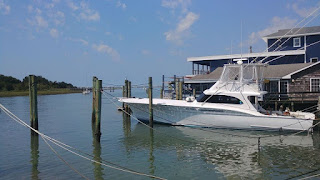 I arrived early Friday afternoon so of course Stephanie had planned a hot sweaty run exploring  the country roads around her home. I wasn't tapering for this as it was mostly for fun so we enjoyed the time and had a chance to pet a variety of four legged animals including a donkey, a mule and a Shetland Pony.  There are some great views of the water and marshlands and even a little peek of the ocean between a couple of islands along the route.

I was surprised that she had followed through on plans to run the race this year as she usually runs only longer events and this would probably be her first 5k road race. I assured her that she would still be faster than most and to just run hard and have fun feeling the speed ! So,early Saturday morning we made the  drive over and easily found parking within two blocks of the start/finish area and made our way over to pick up our race packets.Then we did a  little warm up mile before making our way to the start. I won my age group last year and was hoping to repeat but my mileage has been much lower this year so I really wasn't expecting to be as fast.

As I lined up close to the front of a field of about 150 entrants, there was one older guy there checking me out. He looked ready to rumble. Ok, it's on. Let's see what you got. And then we were off. 50 yards later and I never saw him again. There is a u-turn after about the first half mile and we were already spread out a bit. I was feeling pretty good and settled in. Stephanie looked like she was comfortable and having fun as we passed by. I was in about 15th place at the turn.

Over the next mile I made my way past a few that need to learn about pacing and hit the mile in about the time I expected, slightly slower than last year. Just cruising along now trying to hold pace. There was another u-turn just before mile two and I had moved into 11th place. Stephanie was still moving well and still smiling.  My mile 2 split was still a bit slower than last year so I knew that any thought of matching last years pace was not going to be happening but at least I was feeling good. Over the home stretch I had a nice back and forth battle with a couple of 30 something women but one finally pulled away and I was able to make the pass for good on the other one.

I hit the final stretch and crossed in 23:30, just 22 seconds slower than last year and once again in 10th place overall and first in my age group. I didn't have to wait too long before Stephanie finished and although I told her before that she would make the podium she was surprised to win her age group as well ! We were having too much fun waiting around for the awards and entertaining some of the volunteers. 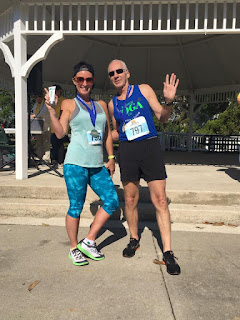 So, if you want to have a fun time and  have an excuse to make it to the coast , then check this one out next year.  A week afterwards and Stephanie is asking me advice on speed work !
Posted by runjoey at 3:40 PM No comments: