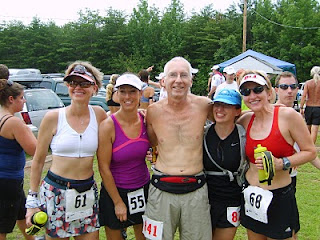 As I entered the main aid station at the church, 30 miles into the race, the ladies volunteering asked me how I was feeling and what did I need. I replied that I needed a good reason to keep running because right now I was not feeling very motivated . So Susan Dummar says, Where is Ultraman Joey? What are we going to call you now? I said I guess TRFKAU or The Runner Formerly Known As Ultraman.

Little did Susan know but that is exactly what I had been asking myself as I slowly dragged myself up 1.4 mile Bethel Church Hill for the 3rd time in the still, muggy, hot hours just after midnight. Things were not going as I had hoped and planned and now I was just slow, hot and tired and wishing I could just stop running , cool off ,have a cold drink and eat. I was looking for a good reason not to quit.

But then why was I here anyway? It has been over two years since the last time I have run over 50K. The last two 100 milers and a 24 hour run had all ended in DNF's and I was physically and mentally burned out on the sport and a long break was needed. During that break I achieved what I had wanted. I am now injury free, I've qualified for Boston, I've finished an Ironman and this January I ran a 50K Pr. And I was ready to once again be Ultraman Joey. Or was I? I'm hoping to go run 100 out West next summer, probably at Tahoe Rim with Jenn. What if I can't even finish another 50 miler? I drop out now and just go ahead and tell her to forget it? That I'm done with Ultra's?

As I slowly trudged up the hill, I kept asking myself why I should keep going. I certainly have nothing to prove to anyone but then it's never been for anyone but myself anyway. And that was the answer. I would go on because I am Ultraman Joey and I wanted to finish this thing for me. So, even before kidding around with Susan and Tammy and Ms. Wright at the aid station I was already committed to going on.

Susan told me to eat something while I sat to take a short break. I grabbed a cookie and she told me I needed to eat something more substantial next time through.( I found out later Jenn had told her to make me eat.) I am so lucky to have my wonderful Angels and Princesses to look out for me and encourage me.

So after a few minutes I stood up and headed out into the dark for lap 4. This would be the slowest and loneliest lap of the night. I ran the whole evening with out a light and it was very dark and remote most of the evening but that is the way I like to Boogie. It was a little strange but I actually felt better running than when I was taking walk breaks. I made it over to the dog pen aid station and sat for a few minutes kidding around with the helpers over there. It seemed like forever before I finally made it back around to the main aid station at mile 40.

I grabbed some baked potato and sat to try and eat it but as soon as I put it in my mouth I got a gag reflex so I spit it into the trash and said I guess I want be eating anything this last lap. I was able to take a gel with no problem though so I was still able to get in some calories. Just as I was about to leave, Laura The Trail Angel came in finishing first woman and 4th place overall. I went over and gave her a congratulatory hug and then headed out for my last lap.

And strangely enough I began to feel a little better on the last lap. I still took a short break at the dog pen again but then when I passed the church at mile 46 I just kept running on down the hill for the last time. As I made the last turn and started up the hill it began to get light as dawn was beginning to break. And finally it was over. there at the finish was one of the things that make this sport and especially this race so great. There greet me at the finish and checking to see if I needed anything were the race winner Jonathon Savage and Laura the womens winner along with Mike Walsh who had shared the ride down with me.

So how was it? Hot, humid, long and hard. But I found Ultraman Joey and I'm happy to report that he is alive and doing very well.
Posted by runjoey at 8:14 PM 4 comments:

No doubt about it , I was born to Boogie 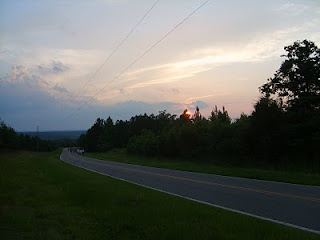 What is it that causes us to want to return to the Boogie? On one hand it is a beautiful setting. A low-key event with many friends with a great race director and wonderful volunteers. There is something magical about running on those sparsely populated roads into the wee hours of the morning with the lightning bugs and sounds of the night.

On the other hand it is usually very hot and muggy on pavement and the other biting bugs of a southern summer evening.

Well, I can't explain why but I'm looking forward to returning to test myself on this course with it's unique challenge. And a test it will be with realy high temps for this years race. The predicted high for today in Ellerbe is 97F. At least after the first lap we'll have shade and cooler temperatures but still hot and humid. The last time I ran here was in 2008 with very disappointing results. I had been struggling with my hip and hamstring pain and dropped out after just 10 miles. The pain had gotten so bad I couldn't run up the hill the first time and was nearly in tears from the pain. It was then that I began steps to began my rehabilitation.

It has now been over 2 years that I have run over 50k so it will be interesting as I attempt to move into the long ultra world again. Although I have not been doing any ultra-specific training, my running has been going very well. I have focused mainly on marathon training and most of my ultra pr's were set after similar training in 2005 and 2006.

My plan has been to try for a 50 mile pr. Of course I was hoping for a bit milder weather so I may have to back off on what I was planning to aim for but with luck I may sill have a chance. Most of my 50 mile races have been on tough single track or mountain runs and my 50 mile pr is actually the 50 mile split on my way to my 100 mile pr at Rocky Raccoon in Feb. 2007.

For those of you new to the blog here is a video I made for the boogie.
Posted by runjoey at 11:45 AM No comments:

Everybody knows the best way to train for a 50 miler is to race a 5k the week before. Right? Well, maybe not but for some reason I had the urge to try another 5k. Since last June and my focus on marathon training I have improved my 5 k time every race going from 23:26 last June to 21:33 last month which was my fastest since Oct 2005. This is without doing any training for racing 5k's so I am happy to see the speed improvements. Now I'm curious to see how much faster I can get at the shorter distances as a GrandMaster but that will have to wait. But for now I was hoping to see if I could possibly get close to that 2005 time.

Well I should have known better than try on a hot humid weekend like we had today. With the late 9am start, the sun bearing down on a cloudless muggy morning there would be no fast times for anyone. I chose this race because its a short drive from home, has a relatively flat course and it is for a good cause. It is a memorial for Andrew Johnson , a firefighter that was killed and the proceeds go to several relief groups for Fallen Firefighters.

I arrived early and walked from the remote parking area to the Archers Lodge VFD where the race would be held. It was already in the 80's and I was sweating just walking to the registration area. Not a good sign. I did a 1.25 mile warm -up and wasn't feeling too zippy then did a few strides and then lined up with 113 others.

I was surprised to pass the half mile in 3:19 because I didn't feel that fast. I had heard it wasn't a certified course so i was wearing my garmin and the half was dead on. Got to the 1 mile and was already slowing down to 6:57. As I approached the turn I saw Raleigh friends David Meeker and Kimberlie Fowler running in a lead pack of four with two teenagers. Gave them a cheer and pressed on.

Passed mile two which was also exactly 2 on my garmin in 14:16, a 7:19 mile and way off my hoped for pace. The last mile was pretty much painful suffering as I tried to maintain as fast a pace as possible. I was able to at least get under 23 with a 22:47 final time, so it was still about 45 seconds faster than last June and I was able to grab 2nd in the 50-59 age-group. Final Garmin measurement was 3.07 so it is probably very close to being a true 5K.

In fact everyone I knew at the race won something. David was just out kicked by one of the kids and was 2nd overall. Kimberlie was 3rd overall and first female. Crystal Moore won her age-group, Val Price won the 60 to dead age-group and a young man that is a new runner and just joined the NCRC, Jordan Duvall was 3rd in the 20-29 group. Interestingly, he runs in the Vibram 5 fingers and has never run in regular running shoes before.

So anyway, despite the suffering in the heat, the pain was short-lived, I had fun and got in a good run.

Here is a link to the race.

and here are the results.

No pictures form this one but they will have a lot on the website I'm sure.

On to the next one.
Posted by runjoey at 7:20 AM No comments: