Run For The Roses 5K 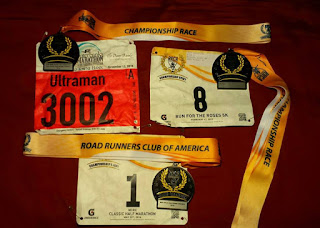 It wasn't until Race Director Elizabeth Werner announced that the race had been chosen as the RRCA State 5k Championship and then called me out on Facebook that I decided to enter this, the 37th annual RFTR 5k. I had raced in that very first one and several other years but not since 1999, although I had been a volunteer many times since then.

After recovering from my December marathon and the cancellation of a planned 50k I found myself with a little less than 5 weeks to do a crash course in 5k training. Knowing the race route was a hilly one I divided my hard workouts between hill repeats and speedwork. Everything went well with that and I felt as prepared as I could and ready to take on the challenge.

One thing I wasn't prepared for and neither was anyone else was the record heat that was coming.  By the 2 pm start it hit 80 degrees ! I did my usual warmup and just before the start as I was doing my strides I was not feeling good at all and beginning to have doubts about whether to push it. I lined up near the front and close to a few of the people I expected to be racing for the age group and just decided to see what would happen.

I took it very easy until we started on the first downhill at around 1/4 mile and was relieved to be comfortable with the pace and by half mile I passed the one guy I was sure was my age that used to finish in front of me most of the time. That first mile went quite well and with the loop near halfway I was able to see the bulk of the runners that were behind me. One of the great things about running in these local events is knowing so many participants and volunteers. I was encouraged and motivated  by the many cheers and folks calling out my name all along the course.

I passed  about the halfway point right on pace for what I was hoping for and thinking I would need to do for the win but I was hurting and the hot dry air already had me with a bad case of cotton mouth. I really wanted some water as I passed the tables but I didn't want to slow down and it really is only another 1.5 to go right ?

I took advantage of the downhill to the two mile mark by pushing it a bit and I passed  a racer that has beaten me more times than not over the years when I run these shorter events. I know he is getting close to turning 60 if he hasn't already and I really want to stay ahead of him.  We start up the first of several short hills and he passes me  back but I regain the lead on the next little bit of downhill. Then we hit the steepest nastiest hill and I feel like dying and the I am making my death noises as I give it all and hope he doesn't pass me.

The hill levels out a bit and about the 2.5 mile mark  we pass a course monitor. I know she meant well but when she said to "mind the heat and take it easy" I was thinking seriously? I've got a tough competitor three steps behind me and I'm trying to catch another grey haired unknown up ahead of me. No way I'm taking it easy. I'm RACING !

By now I am making my usual death noises and pushing just as hard as I possibly can and then I finally see the last turn and the 3 mile mark. Less than a minute of intense pain to go. I don't really have another gear and heart and lungs are at max so I just hope I don't get passed.   And then finally its over. As I hunch over  gasping in agony a young guy that finished just in front of me comes back and ask if I'm ok. I stand up straight and smile and pat him on the shoulder and say, yes, thank you , I feel great ! Racing hard is like a near death experience followed by a  feeling of living life to its fullest.

While I wait for the results I go to text my best friend my time of 22:43 and then wait to hear if I won. Before I can make it back to the finish area a friend congratulates me on my win ! Woohoo ! I did it ! Never in even my wildest dreams could I have predicted that I would win the RRCA State Championships 5k, 10k and the half marathon for Senior Grandmasters.  A lot of things had to all go very right for me to accomplish this. I am blessed with great support from family and friends, a great training partner and good health. I worked hard and never gave up hope battling the previous 2 years of injury. Training smarter and doing all the yoga and cross training have been the key but mainly it is the love of what I do. Go out and chase your dreams. Sometimes they come true if you work for it.
Posted by runjoey at 8:14 PM No comments:

Run For The Roses 5k Preview and training update

The Run For the Roses is a 5k event put on by the North Carolina Road Runners Club and is one of the oldest races still around in NC with this being the 37th annual coming up this Sunday. I was a participant in that first one running a 19:34. I returned the next year and ran what would end up being my fastest for the race, a 19:11. I had a 7 year streak and then didn't return for about a dozen years . I have not been a participant since 1999 but I have been a regular volunteer many times over the years. The race has had to move to a different location at least 5 times over all these years but the format has stayed the same with the current race being held at the Dorothea Dix Campus.

I had not even considered racing it this year but after the race was chosen to be the Road Runners Club of America's NC State Championship 5k, race director Elizabeth Werner called me out publicly on Facebook to enter. She seems to think it would be a nice addition to go with my 10k and Half Marathon championships. I thought about it and I agree, it would be a nice addition to my collection but its not going to be easy. Anyway, I went ahead and entered and put it out there that I was accepting the challenge.

I had entered the Frosty 50k the first weekend of January as the first race of the year and my return to racing ultras so I was hoping that 5 weeks in between would give me time to recover and get in a little speedwork. Mother Nature had different plans though and the 50k was cancelled but then postponed until the 21st. I made the decision to skip the 50k and go ahead and focus on the 5 k so I in essence had 4 weeks to prepare for the 5k.

The course at Dix Hill is Hilly ! Surprise ! So as I was making my crash course in 5k training plan I felt that hills were just as important if not more so than doing a lot of speedwork. My first  track session  went quite well with my times right where I left off last November. A week later I was at the Art Museum for some painful 1/4 mile hill repeats. That hurt but it went well.

The following week it was back to the track and an even better workout. Another week later and a repeat of the art museum hills and each repeat was about 4 seconds faster than two weeks before. I then topped off the training with a sharpening track workout that I have done before every 5 k race over the past 4 years that has worked out well for me. Nailed that one with better splits than last November so I'm feeling confident that I'm ready to have a very good race.
In addition to these specific workouts I did all my long runs on the hills of Umstead plus another shorter faster 6 to 8 miler once a week in the park and my strength on the climbs has improved.

So now I just have to show up and give it all I've got. Whether I win depends on if I can truly run to my potential and who else shows up. Even on my best day there are some tough guys out there in my age group that can kick my butt so there is no guarantee I make the podium. I will predict the outcome though. Like Clubber Lang said when asked to make a prediction in his fight with Rocky Balboa. Answer ? PAIN !

As for the past two weeks of training other than the workouts above I had some good weeks since my last update two weeks ago. 38 and 30 miles respectively.  The cross training is going great also and in that two weeks I have had another 8 x 90 minute Bikram Yoga classes. Another 10 hours of home stretching and or yin Yoga. 4 sessions of free weights and 5 Body weight days. And I feel great !

Stay Tuned and look for results and report here soon.
Posted by runjoey at 9:04 PM No comments: