It's seems I have a new bad habit of entering marathons that I am ill prepared for these past couple of years and here I am once again with a race to run with no training. I'm fit, don't get me wrong ,it's just that I have done zero long runs this year unless you consider a 13 miler about 6 weeks ago and two Early Spring Half Marathons as long runs. Yep, not going to be pretty.

I had chosen this race back in the Early Spring when I was racing well and had hopes of finding a Boston Qualifier before the Mid September cutoff for entries for the 2019 event. I wanted the best shot for cooler weather and a fast course and this race in Greenfield MA was the best thing I could find.  I was fit and had the speed I would need, just not the endurance to carry that speed for  full marathon. All I had to do was do the long runs. But, I was worn down from the hard racing in the RJ GP Series and the late Spring and all Summer has just been miserable for running. Every time I planned a long run I would fail miserably and lost all motivation to run more than an hour. I finally begin to run a little better but then , whoops it's time to race.

So here I am on my way. I'm just going to go and try to have fun and get the miles in and a finish without hurting anything and then hopefully use it as a beginning to real marathon training for the Fall and a December qualifying attempt.

This will be a good one for that as it is a scenic, low key race in a beautiful rural setting in the Green Mt/ Berkshires of Southern VT and Western MA. A point to point event with the State Line at about the halfway point of the course. The course follows the river for most of the distance with a net downhill grade although it does include 4 major hills with over 600 ft of climb mixed in. I'll just have fun, take pictures and  plan a run/walk strategy from the beginning to minimize the pain with no concern about time.
Stay tuned for pictures and a report soon. Oh, race date is Sunday 8-26 at 7am.
Here is the race website
Posted by runjoey at 2:08 PM No comments:

" Want to see my picture on the cover. Wanna buy five copies for my mother. Wanna see my smiling face on the cover of the Rolling Stone", umm Running Journal ! 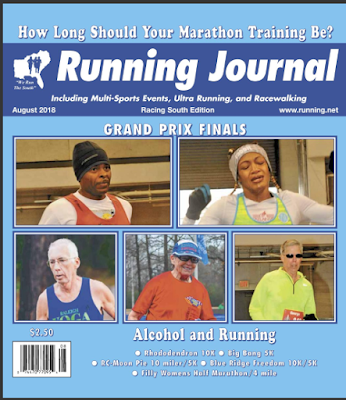 And finally what we've all been waiting for  ! Taadaaa ! I made it on the cover !

As I have posted before, I never dreamed I'd be able to win this series which I have been following since it began as the Racing South Series 40 years ago. I had just hoped that some day I could compete in the series and maybe score a few points and have my name listed in the standings. Until a few years ago podium finishes were rare for me but the series goes 8 deep in the Senior Grandmasters division (60-69) so I was hoping to score in at least a few events.

But then when I decided to take a long break from the ultra marathons and get healthy and go back to racing in the shorter events I found myself making the podium more often than not. But after I won what I feel was one of my best races ever in the OBX Half marathon for the RRCA State Championship against 75 other eligible Seniors in Nov 2016 I began to believe I at least had a shot at not only being competitive but may actually be able to win the thing !

And as you know by now I was successful after a lot of hard work and hard racing in some of the top road races in the Southeast.  I've posted race reports here in the blog for all the races so I won't go into that now but here is a listing of the races and  placement in the Senior Grandmasters Division. 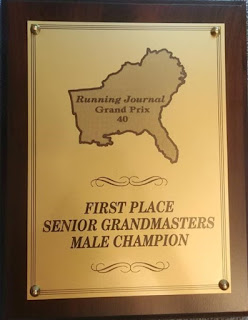 Everyone of these races I can highly recommend as being top notch events if you ever plan on visiting any of these areas. Its hard to pick a favorite as I would gladly run any of them again if time and budget would allow but I'd have to say Magic City was my favorite. Great Venue, nice course, nice schwag and post race food and party atmosphere.

I can't see myself trying to compete again as it is an expensive endeavor traveling to the races and I have other goals to shoot for now but I am so thankful for the opportunity and being able to achieve a dream and goal like this.

Right now I am thinking I want to go back to Cotton Row and seek my revenge on that hill and maybe make the podium in my age group of 60-64 which I missed by 1 spot ! ( yes, 4 other studs in the 65-69 age group beat me !) Other than that the only repeat may be the one NC race next January.

So that's the final word on the Series.    Thank you to all that care and follow along on my adventures. Special Thanks to Mom and the rest of the family for loving me. And Thanks to my daily inspiration and dear friend and yoga teacher Laura for believing in me. 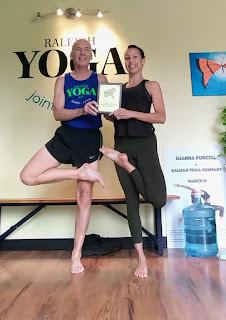