Run For The Fallen 1/2 Marathon 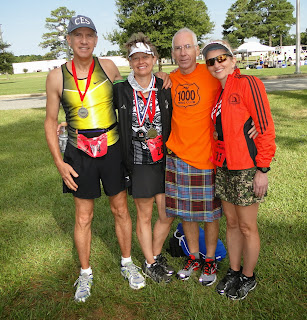 Lets start with the good news. I ran 1:42:20 which is my fastest time since 2006 for a half marathon. It was a beautiful morning with cool temps and dry air. A bit windy but I'll take those conditions anytime for this time of year.My hamstring felt pretty good and was not  an issue in the race.

The bad news? The other leg came up with a mystery pain within the first half mile causing me to suffer significant pain and discomfort and kept me from having a shot at breaking 1:40 !

I met up with Lisa, Karla and Frank before the race. Went for an easy 1/2 mile warmup and felt great with no pain. I was feeling very confident that it would be a good day. There was not a large field with only 85 finishers in the half so I lined up very close to the front. I didn't want to go out to hard and just ease into a good rhythm and stuck to my plan. At first the pain was not too bad, just annoying and I was hoping it would go away after I got warmed up well into the race. I passed mile 1 in 7:29 and it felt easy so I was now thinking I could go for the sub 1:40.

Just before mile 3 the leg flared up petty bad and I was getting worried and had to back off a little but then it eased off to just painful again and I was dead on pace again with a slight cushion.. Miles 4 and 5 were exposed as we ran along beside the runway and directly into the head wind and a slight upgrade. I backed off the effort a little bit until just after the 5 mile mark when we turned out of the wind and into some trees. I only lost a little bit of time there and by mile 7  I was exactly dead even on 1:40 finishing pace and other than the pain I felt fantastic.

Then around mile 7.5 was when the leg really began to fail on me. Lots of pain and I had to shorten my stride and back off the pace. Over the next several miles I was a bit erratic with the pace as the pain would ebb and flow. I was really getting angry that I was feeling like I could run so fast but the leg just wouldn't let me and I helplessly watched the group of runners that were going for the same 1:40 disappear in front of me. I knew I was till on pace to run my fastest since 2006 so I just gritted my teeth and ran with a grimace and pushed as hard as the leg would let me.

Finally around mile 11 it eased off some and I was able to get the pace back to around 7:40-45 ish for the remainder of the race. Finished up with a good time but so frustrating to have another injury now. It was really strange to run a good time and still feel like without the pain I could have kept going at that pace easily for several more miles :(

Karla ran well and ended up with 1st womens grandmaster award and 4th woman overall. Lisa was happy with her effort after struggling with her training for a long time now and Frank had a very good day too. We had a great time hanging around after the race eating burgers and hot dogs for breakfast !

Run For The Fallen 1/2 Marathon- Preview

I'll be heading out to race a rare half marathon this Saturday Sept. 14th at 6:30 am. The race is at Seymour Johnson Air Force Base in Goldsboro and is a fundraiser for The Wounded Warrior Project . I found out about it several months ago from a flyer they dropped off at Capital RunWalk and saw that it fit my schedule in my build up for the Wineglass marathon in Oct.

Yes, I  did run The Myrtle Beach Marathon this past February and oddly enough although I wasn't "racing" it, it was my 2nd  fastest half since 2006. As you may know I was pacing Amy in MB and had a fantastic run in 1:43:29 and felt like I could have gone quite a bit faster on a near perfect morning. The last time I raced was way back in March of 2011 when I ran 1:43:03 at Tobacco Road.

When I signed up for this I was excited to run on this flat fast course and test myself because I really feel like I'm in even better shape than  I was in 2011 but the past few weeks I've been a bit worried. Due to my hamstring issue before and during the Beast of Burden, I don't feel like I have been able to do the training that I would have liked. The good thing is that after an easy week with just one short run after BoB, I have at least been able to get back to my weekly average mileage of about 50 mpw. I have been especially encouraged in just the past few days. Although the leg is not even close to 100% yet, I have been able to get in some good quality workouts and no problem with any pain while running. Amy and I just did some mile repeats this past Tuesday at about the pace I hope to be racing Saturday and  now t looks like it's going to be a pretty cool morning.

Not going to make any predictions on time but I do intend to give it a good solid effort and if things go well I do expect to beat that time from two years ago. When I signed up I was hoping to go under 1:40 but I'm not going to hurt myself trying if that pace is too fast.

Stay tuned !
Posted by runjoey at 9:32 PM No comments:

Sorry it has taken so long to post about this one. For those that don't know already it was another DNF and I really hate writing about DNF's. I will spare the gory details but the race deserves a little report at least.

Overall this is an excellent event and I can highly recommend it for the organization and volunteers. They put on a top notch event with good aid stations, especially the main one at the start/finish where they had and were cooking a large variety of food as well as many of the usual aid station far.  The only downside is that the course gets really boring very quickly. It is a flat out and back, 25 miles round trip that is repeated 4 times. There are a few nice views along the way and the bridges and small villages are interesting but mostly just the canal , the towpath and trees. Unfortunately the trees offer no shade for 23 of 25 miles each lap. This could be a very fast course in ideal weather but even with the somewhat mild 80F day, it felt VERY hot all afternoon with the sun bearing down.

My race started out ok but I was in pain from the first step. I had tweaked my hamstring two weeks before getting ready for a 5k, racing it and then doing speedwork two days later. Yes, it was a very dumb thing to do especially considering that I was aiming for a pr here . But anyway, I was hoping it would hold up for the distance and the pain would ease off after I got warmed up for a couple of miles but sadly it never stopped hurting. I was running quite well despite the pain for the first 25 miles and on pace for the pr but as I headed out for the second lap it just kept getting weaker. By 31 I could barely run at all and even walking fast was now hurting it quite a bit. My pace slowed so much over the next 6.5 miles that at the rate I was moving I would not even be able to move fast enough to make the 30 hour cutoff even with the nice cushion I had built the first lap. So I  reluctantly gave up at th 37.5 mile turn around aid station not wanting to do further damage for nothing.

Jenn the Ultra Angel of course accompanied me on this trip and she was still in the race so I became her crew. She had really struggled with the heat and was having a tough time getting in calories. But she is tough and hung in there and even picked the pace back up on the last lap to finish strong in just over 25 hours.

Here is a link to some pictures I took from the race.
Posted by runjoey at 9:04 PM No comments: