The Championship that almost wasn't. 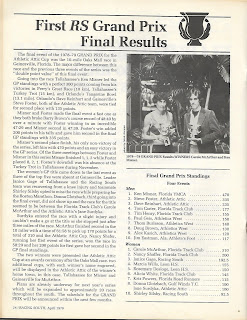 I'm making final preparations for my trip to Huntsville Alabama's Cotton Row 10k which will be held on Memorial Day, Monday the 28th. It is the last race in the Running Journal Grand Prix Racing Series which began the last weekend of August 2017 consisting of 8 races in the Southeast. As many of you know, I already have enough points to win the Senior Grandmasters Division without this event but there is no way I was going to miss going to this one.  I've worked too hard and raced too hard and traveled way to much to let this opportunity pass me by, especially looking back now at how close I came to not even competing.

I have been following the series since the 1st year it started as the Racing South Series in 1978. At that time it was only an open division series and the winners were a who's who of southern elites in the six States in the coverage area, NC, SC, TN, FL,GA and AL. Later more States were added, MS and LA, then ARK, KY, VA and WV and a Masters division was created.  Eventually Grand Masters and then finally Senior Grandmasters were added as the running boomers of the 70's had all aged up. By that time I was solidly into ultra running and although I had the desire to  compete in the series it made no sense and never fit my schedule.

But it was always something I wanted to do and I kept it in my mind that someday I was going to see if maybe I could at least earn a few points in a few of the races and maybe show up in the standings in the magazine but the thought of winning any of the races, let alone the series was something I didn't think was even a remote possibility. I was not accustomed to podium finishes very often but the points went 8 deep in age groups for the series.

Funny how life can change ! And suddenly with no warning ! It seems everything was crashing down. Life totally blindsided me a few years ago and to add injury to insult, I had one hip or glute injury after another on top of that. In spite of it all I was determined not to give up  and used the pain and setbacks as extra motivation to comeback each time stronger than ever. After being injured pretty badly and still trying to run Western States 100 in 2015 nearly crippled I really screwed up my hamstring and I knew I had to heal completely. Time off and yoga finally did the trick but I also decided it was time to take a break from the long distance stuff and focus on shorter racing.

I went into 2016 strong and healthy and began running times at the shorter distances that I never imagined focusing on lowering my mile time and then entering some RRCA State Championships. I went into 2017 in awesome shape winning the State 5k  and had my sights set on finally competing in the series in the Fall. And then WHAM, a freak injury started from yard work that soon developed into a heel stress fracture !

Time dragged on but the pain still lingered and there was a lot of soft tissue damage in the bottom and side of the foot. After two months still no thought of even trying to run. I knew it was serious and promised myself  I would'nt even try to run until I had at least 10 days of no pain. Finally after 12 and a half weeks at the end of May I was able to run 1 mile pain free. But the series was not looking good. I only had 3 months to get back into shape and I would have to build back slowly because although I was healed it was going to take some time for the foot and tissues to regain the strength to handle hard training and racing.

The schedule for the upcoming season was released in June but I had my doubts and was only up to 15 miles per week and a long ways from my condition prior to the injury. As always I discussed the situation with my BFF, former running partner, current yoga buddy and teacher and daily inspiration Laura and expressing my doubts as to whether I should try it or wait until the next year. As I knew she of course said I should go for it and had no doubts I could make it happen.
Its awesome having a friend that believes in you sometimes more than you believe in yourself. And of course she was right. I had to go for it. I was just going to have to race myself into shape and it would help that after that first race in August I would have about 6 weeks before the second race. But I'll save that in the season wrap up after the Cotton Row Run ! Stay tuned sports fans !

Posted by runjoey at 3:31 PM No comments:

It's easier to just called this the Morehead City 5k. I saw neither the port or the fort as this course is all contained in the old residential area of town. My reason for coming to this was an excuse to visit my friend Stephanie and her baby girl Bowie.  I wanted a test race and some speed training and this event fit the bill perfectly.

This is a small race with mostly locals but a few others traveled a bit taking advantage of a nice weekend at the beach. It wasn't too warm yet and the humidity wasn't bad at all for late Spring as I arrived early to pick up my race packet. I watched the start of the half at 7:30 which nearly caused me to miss some of my regular warm up routine. It wasn't a problem and I was able to get in my easy mile and just a couple of strides before rushing over to the starting line. Not too many people were eager to be up front so I lined up just behind a couple of fast looking young guys. 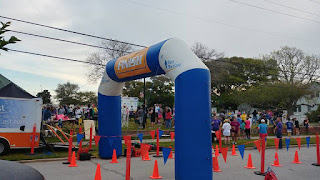 It was about 62F and the sun was starting to break through the clouds now as we began. Quite a few people went out at what I judged was probably too quick but I felt good and was happy with the stride as I settled in. Less than half a mile later we made a u-turn and already things were thinning out and I was passing a few folks. One that I was most impressed with was a tiny little girl that was motoring along at what I judged was 7:15 pace. It was another hundred yards later that I passed her and thought to myself, once she learns the art of pacing she is going to be tough ! Turns out she was 8 years old and held on for a 25:30 finish !

I went through mile 1 in 7:20 feeling good but had hoped it was a little faster. By now the field was spread out and there wasn't going to be too much passing going on. I was trying to hold steady and still felt good. Stride nice and smooth. I was a bit disappointed I slowed a little to 7:27 for mile 2. I was pretty sure I could pick it up a bit with just one more to go so I kicked it up a notch and the body seemed to respond.

What little bit of racing took place in that last mile. I was slowly gaining on a guy just ahead and I could hear someone trying to come up on my shoulder with half mile to go. I dug a little deeper but the guy ahead was pulling away and the one behind me was fading so nothing changed in the standings. The last mile was a 7:15 but the course ended up being a bit long. It was a certified course but the way they had the cones lining the route we were taking long sweeping turns into the middle of the intersections instead of running the tangents which myself and a couple of guys I talked to after the race agreed seemed to cost about 20 seconds. Final official time was 23:08. 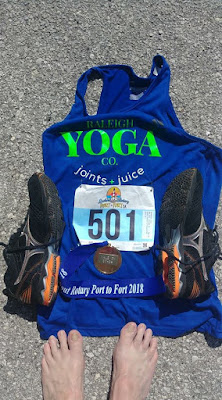 To check on my theory  I ran the course as a cooldown taking the tangents and came almost exactly to the 5k distance.
Speaking of awards, I was 1st in the age group and 10th overall. Had fun, was happy with the effort and the confidence boost that training is going well.
Later I met with Stephanie and we  went for a 4 mile run. It was hot by then and I was tired !

Stay tuned. Next race is the big one in Alabama !
Posted by runjoey at 8:42 PM No comments: