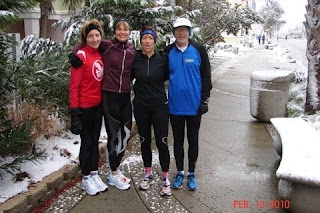 Today I had my 20,000th visitor to my runjoey blog. I originally started the blog in 2006 simply as a place to record my race stories to make it easy to share them friends and family that may be interested in reading of my little adventures in running. It really hasn't changed too much from that although I occasionally post on other things.

I really appreciated the comments I receive from some people that they were inspired by one of my stories or races to go out and push themselves on to bigger things. And it is really cool to have people recognize me at races from them having read my blog. But most of the hits I think are due to a bunch of my regular readers and friends. Thanks Mom and Dad !

Well this past weekend I was suppose to be racing and have a report for you but Mother Nature had other plans. I headed down to Myrtle Beach to run the half-marathon with Mountain Girl, Ultra Angel, Marathon Princess and Mr Minimalist, also known as Lisa, Jenn, Karla and Frank. Frank was running for fun, Karla and Lisa were aiming for PRs' and I was going for a fast workout while Jenn was running the full and hoping for a Boston Qualifier.

Well, it snowed a little bit and the city decided to cancel the race at 10:30 pm Friday night but that didn't stop us from getting in a run. We headed out about 8:30 am from the Breakers Resort for our own Half Marathon on Ocean Blvd. It was about 32F, a little windy but felt great after we warmed up. Mark Dowd was with us for the first 9 miles and pushing the pace a little bit. The roads were clear except for an occasional slushy spot so running was not a problem. It was great to see hundreds of other runners out on the course too and many people were handing out water bottles from their cars and cheering us on. The police cruised by several times but never said anything to anyone about running in the streets.

After dropping Mark off at the Breakers we headed out the other direction for a couple of miles. We were enjoying the beautiful landscaped beachfront homes covered in the rare snow. Just before turning around we spotted Mike Walsh and he joined us for the last two miles. A great run but it would have been nice to race.

While eating lunch at the usual place, we found out they were handing out the medals for finishers over at the Ballpark so we stopped by to pick those up on the way home.

Thanks to all of you for reading and I hope to be a little more prolific in my writing this year.
Posted by runjoey at 7:44 PM No comments: 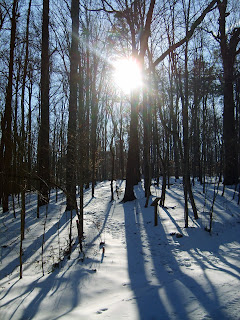 I took some more pictures while I was out there and added them to the photo web album from this weekend. Here is the link again.
Posted by runjoey at 8:33 PM 1 comment: