Ironclad Half Marathon, or time to get serious again

This was a race I'd been looking at as a possibility since it was first started 4 years ago but never quite fit the schedule until this time.  Many years ago I had serviced some stores in Kinston and surrounding towns and grew up in nearby Goldsboro but I'd never raced there in all these years. Of course when I signed up for it I had high hopes of running a fast time on a fairly easy course and typically cool Late October weather.

Of course it would have worked out better if I'd done the training over the Summer.  Based on the Early Spring I had expected to go under 1:44 but now under 1:54 seemed questionable and the weather wasn't exactly cooperating with 100% humidity and  hitting 70F. At least it was overcast. 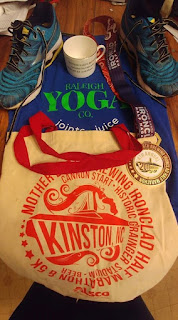 As I lined up with about 300 others I was hoping  that I  may be able to go under 1:50 based on my better than expected performance at the VA 10 miler 3 weeks earlier and maybe still get a podium finish but realistically I figured 8:30 pace or about 1:51:30. I scoped out the competition and noticed a couple of fit looking gray hairs as always.

A replica Civil War cannon sent us on our way and I went out at what felt like a reasonable pace. One of the old guys took off and it was obvious that he was going to beat me today. Within a mile I lost sight of him ! Shortly after what I assume was about 1 mile another one passed me but our paces were close I didn't see a mark until we hit mile 2 in 16:11. Hmm, not bad. A bit faster than expected. there was a slight hill in mile 3 and I slowed down some but the other guy was only a few seconds ahead. I didn't want to make a move this early to make a race of it and by mile 4 I told myself to be patient, that I had 9 miles to reel him in.

And that's pretty much how things went for most of the race.  By mile 5 I had slowed down to close to 8:30 pace so a sub 1:50 probably wasn't happening unless I had a strong second half. My target was still right in the same area usually within 10 seconds of me. At mile 8 I closed the gap to about 5 or 6 seconds but then mile 9 surprised me with a half mile long hill ! Not ever steep but serious enough. He was stronger and opened up a big gap, at least 20 seconds or more.

I hit mile 10 in 1:24:26 and thought at least my realistic goal was still a possibility if I had a good last 5k.  And despite the pace continuing to get slower I was closing the gap slightly. Finally at mile 10 I was back to about 15 seconds or less and figured it was hopeless but no guts no glory, I tried to push one more time. That lasted less than 1/4 mile before nausea and a side stitch forced me to back off and watch hopelessly as he pulled away.

The finish was in  the minor league baseball stadium and I tried to look good as I made my way around to the end. 1:51:26 ! pretty much nailed the realistic goal. And I was soaked form the sweat. Who knows, maybe If I'd drank some water on the course things would have gone a little better?

I  made my way over to congratulate the guy and he was 60 and a local. We had a nice conversation and then I went to get on some dry clothes and wait for my friends. Had a nice time hanging around with Stephanie and the Akers family and then picking up my award for 3rd place. Yep,that guy at the start was my age and from Cincinatti Ohio.

The next morning I was recounting the story to Laura at the yoga studio and when I told her the guy ran an off the charts 1:36 for the age group win she just said something like, well there you go, something to shoot for. You can do it.  She's awesomely inspiring like that.Hmm, I don't know about  that but I know I got a lot better in me yet. Now it's time to keep making the run a priority and see what happens. Lots of racing still to come ! 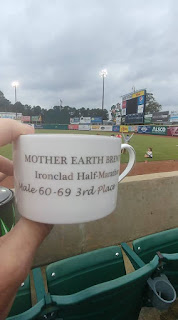 And if you are looking for a nice small down home race this is an excellent one. Nothing but great things to say about the organization.
Posted by runjoey at 9:03 PM No comments: