As I mentioned in the post of looking forward to the year, I had tweaked my hip and upper hamstring . Turns out to have been a bit worse than I hoped. I was thinking a week off and I would be good to go but it has taken much longer. I tested things on the 7th and although i had a decent pace for 5 miles it hurt the whole time. I have not even tried to run since. It has been feeling much better for the past week now and I am ready to give it a test in the next day or two. I really needed to get things going again for my sanity and for Spring racing !

I have not been completely idle as you would expect. I have kept up with the core and body weight and/or free weights nearly every day and in addition I have introduced something new to the arsenal,  Bikram Yoga.

Yes, it's true. Although I have dabbled in some yoga in the past including almost a year of 30 minute workouts 4 or 5 days a week at home a couple of years ago I have never done a class before. Well, actually I did. Nearly 3 years ago I went to a hot yoga class at Arrichion with a friend. It was a 50 minute flow yoga. I lasted 45 minutes and decided I had enough of that !

Then several months ago my #1 training partner Laura began going to Bikram and fell in love with it. I think she has missed maybe 2 days in nearly 6 months now.  I had been considering giving it a shot so why not now ? So on the 8th I met her at the studio with one goal , last the entire 90 minutes.
I did survive and what a workout  ! I did have to take several short breaks but I did at least one set of all the poses and despite sweating over 5lbs of water I kind of enjoyed it. Much different than the other class I had done before. Since then I have been to 9 classes in two weeks. I have already noticed a lot of improvement but I have so very far to go.

Although I can't see myself doing it 7 days a week I do plan to try and get in at least 3 classes a week , maybe 4. It is time consuming and can be hard to squeeze in a class everyday and once  do run again I need that time for training.

For those that aren't familiar with Bikram Yoga it is a 90 minute session with 26 poses bookended by breathing exercise. Every class is just like the one before it, never varying from the routine. The room is typically around 103-104 F
Here is a chart of all the poses.Each pose is done twice before moving on to the next. If you click on the picture it will zoom so you can actually read it ! 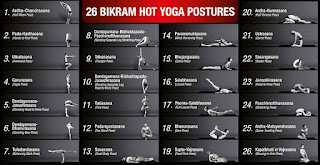 I do hope to have some running for you on the next update but for now, namaste

Posted by runjoey at 9:06 PM No comments:

Well, I kind of have an idea and I will share it with you. This will certainly be a different kind of year because for the first time in 14 years I have no plans to run any ultras. In case you missed it , Ultraman has taken leave for an undisclosed amount of time but for sure he is not coming back in 2016. Beyond that, who knows?

So what is going on? Several things were involved with that decision but we won't get into that other than to say  my heart just isn't in it right now.

The first thing on the agenda is to stay healthy which is not getting off to such a great start. I may have to take off some time for the next week or two. I had hoped to return to the Ocean Isle Beach half Marathon coming up next weekend but that is now out of the plans. So with that let's assume I can resume running and training very quickly.

No further plans for January other than train. Same goes for February unless I change my mind and find a 10k to run.  OK< back up a second. Goal # 1 is to run as fast as possible at Boston which explains why not much racing to start the year. I am going to maintain focus on the big picture. In years past I had done a lot of racing at least 20 to 25 a year. I did cut back a couple of years ago to focus more on quality than quantity and thats where I am staying.

Now back to the plans. In March I am signed up for the Myrtle  Beach Half. Last year was the first time I hadn't been there since 2005 and if was still in February I would have probably skipped it again but the early March date fit my training. And thanks to Laura's influence I am returing to Wrightsville Beach again but this time I will just do the half for training. It is a good race and lot of fun and who knows, maybe someday I will do the Full marathon again.

And then of course is Boston on April 18th. I am hoping for good health, good training and good weather all to combine for a great race !

After April I don't have any particular race scheduled right now in May or June but the plan is to do some racing on the track, some mile and 1500m and maybe some 3k and 5k's I would really like to focus on getting as much speed out of the old body as possible. And I am sure I will find a 5k road race or two.

In July I am probably going to go run one of the classic road races, the Utica Boilermaker 15k if I can get in.

August will be still concentrating on faster stuff either on the track or short road races.

In September I am running the Virginia 10 miler in Lynchburg VA, another classic. If you don't know, I ran it for the 1st time in 1978 and had a fifteen year streak there. I ran it another two or three times but haven't been back since  around 1999 I think.. I am really looking forward to challenging those hills one more time.

October is up in the air but I am considering the ATT 10 miler or maybe a couple of other road races.

In November I have signed up for the Half at OBX. I have always run the Full including the first year in 06 and 6 other times. I just couldn't  go for personal reasons this past year but I decided I have to go back for myself and maybe even just to irritate some people. But instead of the full I wanted to do something different and focus on a fast half and hopefully make the podium and train for my next big attempt at the marathon.

Which will be in December. Leaning towards Kiawah or Rocket City.

And there you have it. Still a few blanks to be filled in and some things may change as they tend to do.

I hope to share some miles this year with more of you and i really hope for more miles and fun with the best training partner ever. Stay tuned.
Posted by runjoey at 9:00 PM No comments: