Boogie Blues and other problems 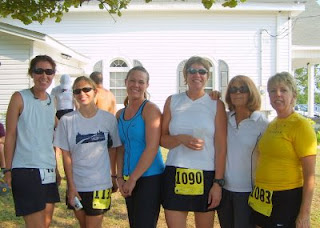 Mmmmm, this Klondike bar is soooo good. Oh, hello. I'm glad your here reading my blog. Yes, I know I haven't written much lately and have been slow in posting my reports. I have been a bit busier than normal the past few months but things have settled down a bit now. But the real problem is I just haven't felt much like posting lately. I have had a very frustrating year with my running performances. There have been a few successes and good times but too many times I've had sub-par performance and several dnf's. Even some of my training runs have been a struggle for a while so now I just have to face reality. I'm injured. I have been for quite a while but I stubbornly tried to run through it and hope it would go away. Well, as you now know that plan didn't work out too well.

I had been on quite a roll with a couple of really great years doing things I never imagined I would be able to accomplish and I guess I had begun to believe that I could go on forever at that pace and not have to take a break. Oh, I thought I should rest but there was always another grand adventure or challenge that I needed to train for or compete in so rest would have to wait.
I guess it started way back last August when I realized I had developed plantar faciitis in my left foot. I was able to run with it so I did and it finally went away a couple of months ago. In the meantime I was still having some running successes including a 5oK pr and my back to back marathons in Nov. and a strong run at Frosty 50 and Tybee although I failed in pr attempts n both races.

I think the real problem started soon after the double marathon in November though. I noticed a lot of stiffness and soreness in my upper hamstrings and into the area where they attach to the pelvic area (my butt) on my training runs. When I would take a short break and start to run it was painful until I got moving again but I figured like everything else it would soon pass. Trouble is it didn't. I had a few massages back in Dec and Jan that seemed to help some but of course I kept racing. I began to notice that my times on courses I normally trained on were becoming dramatically slower at the same effort and my legs were tiring early in my runs.

By the time the Umstead 100 came around I was in a lot of pain and was doubtful I would be able to even start but I was so hard headed and intent on going for the PR that I ran anyway. And of course that didn't turn out too well either. It was another problem that ultimately caused my dnf but after just one loop my legs were tired and achy and I was going much slower than I normally do for a 12.5 mile and even before I had the other problem I was not enjoying being out there and just wishing it would be over. Since I dropped at 69 miles I thought my recovery would be quicker than normal and I took my customary week off after a 100 miler but over the next few weeks my legs and butt were in quite a bit of discomfort and feeling so weak. My hamstrings hurt worse after a 6 mile run than they normally would after a 50 miler. By the time the Garner 5k rolled around they were finally feeling so much better and I was so happy to run a great time there and have life in my legs. But then a week later was the meltdown at Fargo. My legs felt so weak and achy by the 7 mile mark and by 9 I was a mess.

And now I am a big mess. After Fargo I hardly ran at all and I really had no business running Swan Lake but I couldn't pass up a chance to go to SD and run with the Marathon Princess. And then it was time a week later for the Boogie. I knew I shouldn't go but I didn't want to miss out on the fun. Pretty dumb. One loop and coming up Bethel Church Hill one time and my hamstrings were screaming at me for mercy. So I finally listened too them and quit.

So now what? Well before I left for SD, I began to see a chiropractor. X-rays and other test revealed a sublaxation in my lower back and apparently the nerves are only firing about 30% into my hamstring area. That would explain a lot of the weakness.The extreme tightness in my legs and a slight pelvic misalignment combined with the PF have helped to bring about muscle imbalances as other things tried to compensate and relieve the pain creating a screwed up mess in my legs. The good thing is there is a real good chance that it can be corrected. I am taking some time off running and I have re-joined the Y after an absence of three years. There I am working on some strength training as well as swimming and biking again. I am also seeing my massage therapist again and will stick with it regularly until the pain is finally gone. The session Thursday was excrutiating but after I left his office I could already tell a big improvement.

So what about the Boogie? Well it was very hot the first loop, around 94F I think. Typical weather for a Boogie. I really enjoyed being there and seeing so many friends from the MTC and others. A wonderful group of people as always. I started off easy and settled in for a long night ahead. My butt pain was bothering me when I started but as usual it eased off after a mile or so and I was not doing too bad. I ran mostly alone in those early miles but did see a few friends after reaching the Dog Pen aid station. When I rolled into the main a.s. at 6 miles I was doing ok and shortly after heading down the hill, Tony Rouse caught up to me and we ran the next couple of miles together. I assumed we would probably stick together for a good part of the night as we so often do but halfway up Bethel Church Hill I had to let him go as my legs were hurting so much and getting tighter with every step. I know my buddy Fred must have been shocked when I walked into the aid station and as he asked me what I needed I only responded that I was done for the night. Fred and I have shared a few hundred miles on the trail in these ultra's the last couple of years so he knows I don't quit easily unless there is something wrong.

So then I just sat and rested, talked to a few friends and waited for the Trail Angel to finish the marathon. She would place 2nd overall woman in the race and was happy with that on a hot night. I walked with her while she cooled down and told her my sad story of dropping as well as filling her in on the SD trip. It is always nice to have an Angel there to listen when I'm feeling down and it always makes me feel better having a good friend to lend a sympathetic ear.

Now I just take it easy and hopefully I can ease back into running soon. I just know there are not going to be any pr's coming anytime soon but I will be happy just to run pain-free before long.

Here are the Boogie pictures I took
Posted by runjoey at 8:55 AM

I hate it that you are having a tough year with the injury. I hope you do give yourself the rest you need so you can heal up soon. Hope to see you back on the trails before too long.

Hope you get back on track soon. The Boogie was a really tough night. In my 7 years of running and racing, the Boogie was my first DNF...totally understand where you are coming from.