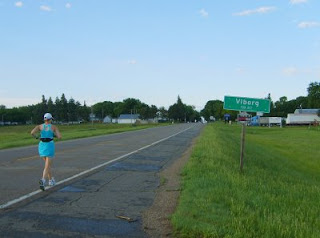 The trip out went well with no problems encountered. I'm always amazed at the vast amounts of farmland passing below as I fly over the heartland of America. We flew into Omaha and rented a nice car for the 2.5 hour drive to Viborg. The first thing I noticed as I flew over Omaha were the vast networks of railroad tracks. Omaha is the home of the Union Pacific Railroad and the BNSF also has a big presence in the area. As we started the drive I noticed the hills over to the east and Karla told me they were the Council Bluffs which the city in Iowa gets it's name from. I found the countryside on the drive over to be pretty and green although quite flat the further north we drove. They have been getting a very heavy rainfall for a long time and there is a lot of flooding in low lying areas Many fields are under water and it doesn't loook good for a lot of crops getting put in in time this year. Could be more price pressure on food this year as a result. It is sad to see the damage knowing that it will affect so many farmers livelihood.

We finally arrived in Viborg around 5pm and met up with Karla's parents. After dinner we drove over to Swan Lake to pick up our packets. We wouldn't have time to do that at the regular time on Saturday because we are driving north of Sioux Falls to Karla's Strunk family reunion. Her mother is part of the race committe so it was no problem picking up our numbers early. We were allowed to pick our own numbers so I am #1 and Karla is #2. I guess the others will think we are the out of town hot shot elite runners. Ha! Frank is #100 in the half-marathon. It looks like here are only about 100 in both races, a few less than last year. Probably due to the Deadwood Mickelson Trail marathon being held the same day in the Western part of the state. It is surprising how many marathons they have in SD considering how little the population is compared to some other states.

It looks like we will get lucky with the weather. The start should be in the 50's and the high is only suppose to reach 75. With the 6am start heat shouldn't be a problem although there won't be any shade on the course. It's nice to get away from the heatwave in NC ths week. I'll try to post results tomorrow. Stay Tuned
Posted by runjoey at 9:06 AM