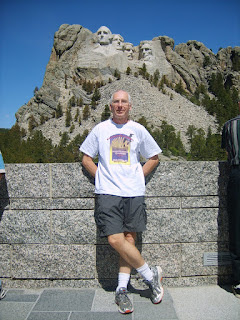 So Tuesday morning I was up and out early again. After coffee at Starbucks while I caught up on my e-mail, I headed back into the mountains and over to Mt. Rushmore National Memorial. It was another cool but lovely day in the 50's making it very pleasant for walking around in the sun. Rushmore was very interesting. I think seeing the old photos and videos of the construction were amazing. The area all around in the Black Hills is stunning with the numerous rock formations and greenery. I've never been a rock climber but I've always loved clambering over rocks and there are plenty suitable for that in the area. I took advantage of that to gain some nice vantage points for photos all week.

Here are the photos from Rushmore.

After a few hours I headed down into the valley to the town of Keystone, an old mining town to catch a ride on the 1880 train. While I waited I had lunch and then took a walking tour of the town by some of the historic buildings and mines. I could hear the whistle of the old engine from the train as it headed into town so I headed on over to the depot.
The 1880 Train or The Black Hills Central Railroad is a tourist ride over what's left of a spur line of the original Chicago, Quincy and Burlington RR that was built in the late 1870's to service the mines and communities that sprung up after gold was discovered in 1876. The train today is pulled by a 1920's vintage Baldwin 2-6-6-2 articulated mallet saddletank engine. This engine was rare in it's day and is the only surviving one of it's type. It was actually from a logging RR in Washington State and was purchased by the tourist line for these excursions.
The ride goes from Keystone over to the shops in Hill City, about 10 miles away and then returns for about a 2 hour trip. On the way over there are wonderful views with Harney Peak, the tallest mt in SD and the tallest east of the Rockies at over 7,000 ft. ( The Black Hills are a separate range from the Rockies and lie about 150 miles east of them. Mt Mitchell in NC of course is the tallest east of the Mississippi river) I saw several deer and a half-dozen wild turkeys as well as a bison ranch. There are several mine sites along the way and many of the abandoned structures still stand.
We arrived in Hill City and I could see a lot of the other rolling stock and 3 of the other engines that belong to the railroad. One of the older steam engines is usually just used in TV,and movie scenes and two diesels pull the train during less busy times of the day. The steam engine is the only one powerful enough to pull all the passengers up the steep grades along the route.
On the way back I was getting very chilly. It dropped into the upper 40's and with no jacket and a breeze blowing through the open car it was quite uncomfortable. There are about 19 road crossings along the way so there were a lot of opportunities to hear the whistle echoing through the hills. After I arrived back in Keystone I took advantage of that and chased the train back to Hill City taking numerous photos of the train in action. One shot turned out great and was just a matter of perfect timing. While I waited for the train to come around a bend , a automobile from the same 20-30's era as the steam engine stopped at the road crossing. If not for the modern road signs the picture could have been taken almost 80 years ago.

Here are the photos from the train.
Posted by runjoey at 9:10 AM