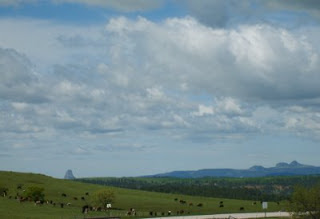 After we finished the marathon and returned to the Strunk residence, it was time for me to say good-bye for a couple of days and head west to the Black Hills. I drove as far as the Capital, Pierre to spend Sunday night. Lots of open plains and farmland. You pass through the Ft Pierre National Grasslands on the way and for as far as you can see are only gently rolling hills of grass. Boring but with a strange beauty of its own. I could only imagine what it would have looked like 150 years ago with herds of bison roaming around and Indian hunting parties hiding in the grass waiting to strike.

Pierre sits on the banks of the Missouri river and is steeped in history from the Lewis and Clark Expedition and the westward expansion. I walked around town after checking in to my motel and checked out the Capital building to loosen up after the 3 :30 hour drive.

Sunday morning I was up fairly early as usual and after a short visit to the river I was heading further west. I decided that my first destination would be Devils Tower National Monument in the northeastern corner of Wyoming, about 25 miles across the SD border. When I was 12 my family spent four days in Wyoming but we didn't make it into that part of the State and I had always wanted to visit, especially after watching Close Encounters of the Third Kind. If you haven't ever seen the movie you should check it out. One of Spielbergs first blockbusters and Richard Dreyfus was great in the lead role.

It took several hours and I was finally in Wyoming. The area is very beautiful and I decided to do a loop which would take me in both directions around the Monument. I drove through the Belle Fourche river valley and was loving the scenery and in awe of how remote the area is. Also noticed I was low on gas. Should have stopped before leaving the interstate! I had to drive through a cattle drive too as some cowboys were moving a herd to another pasture. I had to ease my way through the cows and then one of the men on a horse rode up and guided them back out of the road.

The first view of the monument was exciting and I pulled over to take the first picture. There would be many more. What an amazing site and every angle is interesting. It is no wander the Native Americans believed it to be sacred ground.
I walked the 1.25 mile trail that encircles the whole monument taking in the views around. It was a cool day, in the 50's so it was very pleasant walking. At one point you can still see the remains of a stake ladder that two local men used to be the first to climb to the summit nearly 100 years ago. On the way out I stopped and sat for a while in the meadow at the base of the monument enjoying the prairie dog town. They were so cute and there were many babies enjoying their first Spring.

I still had plenty of daylight ahead so after barely making it back to the Interstate to get some gas, I decided to head to the scenic drive through Spearfish Canyon back over the SD border. The Black Hills had been through an 8 year drought but now they have been in a period of record breaking rain this Spring. The area was very lush and green and creeks and waterfalls that normally would have been dry were flowing with water. The drive through the canyon was awesome with gorgeous views all around. My first stop was Bridal Veil Falls which can be seen from the road. Later I could see Spearfish Falls off in the distance. Eventually the road comes to a small resort area and there is a parking lot just above the falls. I took the short walk down below the falls. Very pretty and I could feel the spray from the falls across the creek.

After leaving the Canyon drive I drove in the town of Lead, site of the Homestake mine, still the worlds richest goldmine and the reason for white settlers to pour into the Black Hills. I didn't have time to take the tour and it was getting late in the day. Just up the road is Deadwood. It doesn't look anything like it did of course when Wild Bill Hickcock came to town seeking riches in the gold mines. There is a No. 10 Saloon in town but it is a block or so away from where the original one where Hickock was shot was located. In 1876 there were nothing but wood shacks and tents built onto wood platforms and that's what the real saloon would have been. It had burned down and the new one was built later of more substantial material. Here is more history on the Wild Bill.

After a short visit in Deadwood I made the drive to Rapid City which would be the center of my travels for the next few days. It rained everyday I was in the Black Hills but fortunately it would always wait until I was done sight seeing for the day. The first evening in Rapid City a thunderstorm passed through and left a beautiful double rainbow. I got pictures but couldn't get it all in one shot. Here is the photo album from this day
Posted by runjoey at 7:19 PM