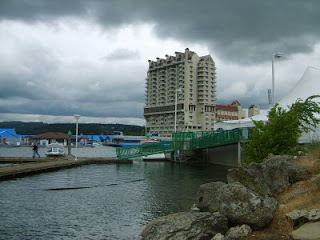 An uneventful flight into Seattle WA on Thursday but it makes for a long day. As soon as I picked up my car I headed east out of town and drove about 110 miles to Ellensburg WA for the night. A gorgeous drive through the Cascade Mountains and into the central desert. Funny thing was that in the normally rainy, dreary Seattle area it was sunny and beautiful but raining when I reached the desert. The westernmost section of the desert is rolling hills made of basalt from over 50 lava flows over millions of years. Then as you head further east it becomes flatter and more like the plains of central USA with miles of scrub interrupted by large fields of various crops possible only by large irrigation systems. Lots of potatoes,peas, corn and wheat mostly.

As you get closer to Spokane you enter the foothills of the Rockies and everything gets green again. It rained lightly most of the morning as I arrived in CDA and then rained steadily all afternoon. I had to stand in line in a light rain for about 30 minnutes to get inside the tent at Ironman Village to get checked in.

After leaving the village I drove over the bike course to get an idea of what lies ahead. I'll give more details in my race report but basically the start and finish of the two identical laps is flat with the middle two thirds very hilly. Oh boy, this is going to be tough for a slacker biker like me. The rain stopped soon afterwards so I went for an easy 4 mile run through town along part of the flat part of the bike course.

Then it was time to head over to the banquet and "mandatory" pre-race meeting. The dinner was pretty good, baked chicken breast and pasta, rolls, salad and chocolate iced brownies. The meeting was a joke. They said it was from 7:30 to 8:30 but they started at 7:05 so a lot of people that didn't come to eat missed most of the meeting. There was no information being given out that wasn't already in the printed info so I left before it was over to get to bed. I'm keeping my body on EDT as much as possible and it was already past my bedtime.

Here are some photos of the trip so far for your viewing pleasure.
Posted by runjoey at 12:38 PM