If I just keep moving then they'll call me Ironman. Part 2, the bike 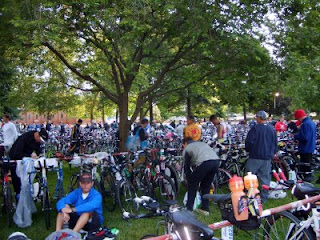 As I left the beach area and headed into transition I got a chance to see just how professional, caring and dedicated the army of 3 thousand volunteers would be throughout the remainder of the day. There were two there waiting to rip my wetsuit off of me and another came running up with my bike gear bag and led me into the changing tent. I calmly changed making sure I had everything I would need and as I headed out another volunteer took my swim gear to put it safely in the staging area for after the race.

I easily found my bike and headed out onto the road for the longest ride of my life. I had opted to wear a long sleeve shirt and I'm glad I did with the cool temperatures and by now the wind had picked up to 14mph. My plan was to approach the ride like an ultra, start easy and taper off. The first few miles through town are flat and easy and I took advantage to begin taking in some calories and fluids. I had been having problems with de-hydration in the past so Jenn had been sending me reminders every couple of days to hydrate hydrate hydrate so I had no excuse not to remember to drink today.

The next few miles are along the lakeshore and here there were several rolling hills. Nothing steep but long and gradual and we felt the full force of the wind. It was a bit strange struggling to go fast downhill but then easily riding above average speed uphill due to the strong wind. After the first hour we headed away from town at around 15 miles in and I was very happy to feel strong and smooth. The next few miles were very nice and flat and the wind was mostly at our backs. My average pace was picking up and my confidence was increasing.

Just past the golf course at Hayden Lake is where the real hills of the course would begin around the 22 mile point. A couple of small hills to warm you up and then a really pretty and quick downhill winding around the northeast side of the lake before the real fun began. As we headed north away from the lake the first monster began and I quickly had the bike in the granny gear and standing on the pedals to climb. The steepest part isn't too long and I was able to sit and grind away to finally make it to the top. I thought hmm, that wasn't too bad. I actually climbed that pretty well. But then I did have a lot more to go with many hills a ahead, another lap and 80 more miles to go.

By now the skies had become completely overcast and threatening. I was sure hoping the predicted afternoon showers would hold off or me a and a lot of others may have to contend with hypothermia with the cold temperature and wind. I continued on climbing the many hills over the next several miles with no problem. There was only one other steep enough to require climbing out of the saddle but too many to count that took the granny gear. Several of them would bottom out with a sharp turn so you had to brake and lose your momentum for the next climb. The wind at least wasn't much of a problem out here in the countryside and with frequent turns and curves we never seeemed to have it in our faces too long at a time.

Finally around the 45 mile point the hills were mostly behind us and we began the trip back towards town and the lake. That was good because it was mostly flat and downhill but now that wind would be in our faces most of the way. I had continued to drink and eat well and they had aid stations set up every ten miles and I took advantage to get off and use the port-a-potty at 45 before continuing on. When I finally made it into town to finish the first lap I was beginning to feel the effects of the miles, hills and wind and my relative lack of training. At 56 miles for the first half I had only ridden my bike that far 3 times in my life. I knew coming in I was woefully under-trained on the bike and was just hoping to to survive it.

As I began the second lap I was encouraged that my average speed was holding steady and although I was tiring I still felt good and in good spirits.The next few miles in town went well but as I came back out to the exposed shoreline the wind had picked up even more from the morning. I was happy to get back on the flat and head away from town but even with the wind at my back I knew I was going slower. My back and neck were getting sore but at least my legs still felt ok.

I was beginning to dread the hills to come but I knew all I had to do was get over them one more time and if i could do that I was sure I could be an Ironman. There were so many volunteers along the course as well as residents in there yards cheering us along and I tried to acknowledge their support and use it to help me relax but when I made it back to the first steep hill I was just about alone as the riders left on the course were spread out over many miles. I shifted into the granny once again and climbed off the saddle but I was beginning to think I was going to have to get off and push the bike up the hill. Every ounce of strength I had and I was only creeping up the hill at 4mph but then as the grade diminished I sat made the remainder of the climb with no problem.

Over the next several miles a strange phenomenon occurred similar to my 100 mile training ride and some of the long ultras and I noticed my legs actually felt better than they had many miles earlier. I was passing quite a few other riders, especially climbing the hills and was soon out of the hills and heading back into town. By now the wind was even stronger at 20mph and gusting so I just tried to keep my head down and crank those last miles and get this over. By now the clouds were very dark and with about 6 miles to go it began to rain lightly. What a welcome sight the transition area was and just like in my song, I couldn't wait to get that stupid bike seat out of my butt.

As always the ever present volunteers were there to take my bike and rack it for me and lead me to my run gear bag.
Posted by runjoey at 11:52 AM