Mt Rainier and the rest of the vacation 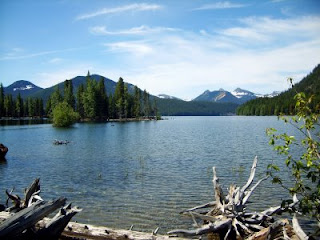 After waking up much too early the morning after the race, I took my bike and gear back to the Inside Out Sports tent for shipping back home and then hopped in the car heading West. I didn't have much more time in Washington and wanted to see as much of the State as possible , especially Mt Rainier. It didn't take long and I was back into the desert area on the same route I had arrived on but soon I would take a turn to the South to see some new areas.

Once again I enjoyed the changes in scenery, the many wildflowers and views. My destination for the night would be Yakima. As you can imagine I was very stiff and sore so I made numerous stops and got out to walk around for a few minutes. I was a bit surprised that I could see Rainier from 50 miles East of Yakima which means the mountain was about 100 miles away. It doesn't show up too well in the pictures but it was clearly visible to the naked eye.

Yakima is in an interesting area and is at the confluence of the Natches and Yakima rivers. They have a nice greenway,rail trail along the river and I was very tempted to run but decided resting my legs was better. I was still very tired too after less than 5 hours of sleep after the race so I checked in and went to bed early.

After a much needed 10.5 hours of sleep I was up and heading West again, destination Mt Rainier National Park. It was only about 50 miles away but would end up taking me half the day to get there. Soon after leaving Yakima you begin gaining elevation and things get greener and soon you enter the Wenatchee National Forest. Every mile revealed another gorgeous view of the mountains , creeks and rivers. I thought I had entered a corner of Heaven for sure. I was stopping over and over again to take photos and soak in the views and being so thankful to be able to see such beauty. It was also a perfect weather day, clear and in the 50's and low 60's.

I saw an info kiosk that had a picture of Bumping Lake and it looked so pretty I decided to make the side trip to check it out. It's about 15 miles down a forest service road but well worth the drive. The speed limit is 45 but I couldn't drive that fast because I was loving the scenery along the way too much to drive that fast. Along the way I saw a moose and a mule deer. The deer ran away but the moose nervously walked back and forth posing, not sure to run away or stay. The forest floor was covered in wildflowers over most of the area too. I finally arrived at the lake and it was better than the photo I had seen. I don't think my pics can do it justice either.

There was a relatively flat dirt road just up from the picnic area and I really wanted to go for a run. I would have loved to have run a real trail but now was not the time for that. I changed clothes and took off down the road. I was happy to find that my legs didn't feel too bad after warning up and I thoroughly enjoyed my little 4 miler all alone on the edge of the wilderness. And it was a perfect 57F and no humidity. If only I could spend the whole summer here !!

By now it was early afternoon and I still had a ways to go to get to Rainier so I was soon back on the way. Once I got back to the main road I began a steady climb in elevation. And still every mile seemed more beautiful than the one before it and before long I could see the snow capped mountains of Chinooks Pass. It's funny in a way that you can Rainier from 100 miles away but I had not caught a glimpse since a few miles after leaving Yakima because of the hills and mountains in between. I thought for sure when I reached the Pass I would finally see it but no, no Rainier in site. But the view from there is magnificent looking back the way I had come from, surrounded by snowy peaks.

Once you leave Chinooks Pass you began to go back downhill and almost immediately you enter the National Park and in just a few minutes around a curve there it is, the massive volcano covered in snow and icy glaciers. It would have been a perfect day for someone wanting to climb the mountain as there were no clouds in sight and a very calm day. Chinooks Pass is about 5,200 ft and the road spirals down to around 2,000 ft and from each vantage point it was hard to believe that Rainer was another 9 to 12,000 feet higher but that is due to the deceptive perspective with nothing for reference in between you and the mountain like from the long distance views.

There are two visitors Centers in the Park and I choose the Northeast corner and the Sunrise Entrance since it would be easier to head back to Seattle for the night. Well, just my luck the road was closed and would not be open for another three days so I was not able to get any closer. I didn't have time to drive all the way around to the Southern entrance so I headed back to Seattle still making numerous stops for photos along the way.

Washington State has so many beautiful things to see and do and I didn't even get to go into Seattle itself. I hope someday to return and spend a lot of time in the state in the Cascades and other areas. I would love to run the Cascade Crest 100 miler some day. Maybe next year?
Posted by runjoey at 1:17 PM