If I just keep moving then they'll call me Ironman ! Part 1, the swim 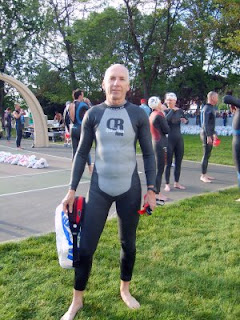 I have to say its pretty cool when the song going through your mind motivating you is one that you wrote and recorded yourself. Funny thing though is that I wrote the song for my friend Thomas Asta before he did his first Ironman and up until a year ago I swore I would never do one.

But here I was now standing on the shore of Lake Coeur d'Alene preparing to begin my day long journey to see if I had what it takes to be called Ironman. The good news was that heat would not be a problem for us with the starting temperature at 54F and the high would only reach 62F. Also the water was only a chilly 65F and not the bone chilling cold of last year. The bad news was the wind was blowing into our faces from the lake and it was very choppy. I remained calm as suddenly the starting cannon boomed and I entered the maelstrom with 2000+

And just as suddenly my dream seemed to turn into a nightmare. I felt I lost control of my body and I couldn't do what I had trained myself to do. I could not Swim !! I could only go 5 or 6 strokes before having to roll onto my back and gasp for air as the waves crashed over me. I kept trying to get into a rhythm but it didn't get any better. What is wrong with me and what is going on? I was praying so hard for God to give me back control of my body and give me the strength to continue. The time was ticking away and I seemed to be making no progress to the first turn and I was beginning to fear my race would be over before the first lap of the swim. I continued to struggle to the first buoy and then it seemed to get worse with the waves coming into my side.

I finally made it to the turn back to shore and looked at my watch. I had already been in the water for 32 minutes and I knew at that pace I would not make the cut-off. And then suddenly I felt a sense of calm come over me and as I rolled over to attempt to swim again control of my body returned to me. I was able to freestyle the remainder of the swim with no problem and I finished that first lap and calmly re-entered the lake to finish it. I did get very tired from fighting the rough water over the last half mile but kept focused on the timing arch on the distant beach. All I could think as I exited out of the water was Thank God I don't ever have to do that again.

I still don't understand what went on in that lake. I was calm as the start approached and the water wasn't too cold. I have swam in much rougher water before including countless swims in the ocean. My training had gone well with at least two swims a week of 1.2 miles at a much faster pace. I just hope I never feel like that in the water again
Posted by runjoey at 10:37 AM