If I just keep moving then they'll call me Ironman. Part 3, the run 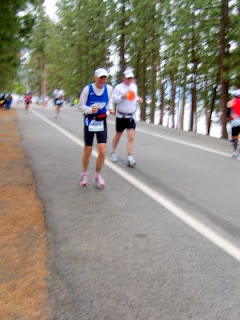 So now at least in my mind the hard parts were over. I had about 7 hours to do the marathon and barring injury I could take my time and do that easily. My legs were like jelly and I was tired but I felt no pressure to hurry up since time was not an issue. All I cared about was finishing and not putting myself through any more dis-comfort than I had too. I entered the changing tent and again a volunteer was there to help in anyway. I didn't need anything but did accept his offer to go get some warm chicken broth. When he returned with it I thanked him and began walking out to the run course.

I walked for about 5 minutes until I finished the broth and let my legs adjust from the long ride and then began running. Hmmm, not too bad. This might not be too bad afterall. The only problem i could see was that it was raining and getting dark soon and I couldn't find my jacket I thought should have been in my gear bag. It wasn't raining hard though and I was moving along at a decent pace so at least I was still generating heat.

When I reached the two mile mark I began my plan to run to each mile marker and then walk two minutes and keep that up as long as I could, hoping to conserve energy so I wouldn't be one of the walking dead at the end. By now my legs were feeling pretty good and my split for 5 miles was not too bad considering I had walked the first 5 minutes. But now the rain was coming down harder and steady. Once again the Ironman organization proved they were experienced at this and had volunteers handing out space blankets at the aid stations. I was glad to take one because I was about to ask for a trash bag. I knew I looked like a dork and I felt like a dork but I would be a warm and dry dork.

I tried taking one gel for energy but it was so bitter I didn't try anymore and was just getting in calories from coke and a little gatorade. This was enough becasue my pace and effort remained very steady for most of the night. I was happy toget finished with the first lap. I was looking for a halfway timing map but there was not one but I checked my watch just past the 13 mile mark and it was about 2:44.Now I had over 4 hours left to do another half-marathon. Piece of cake right?

At least now the rain was stopping and I'm sure the volunteers were just as happy about that as we were. The wind had also died down after dark so it was turning into a decent night for a run. Even though I was walking more now and slowing down I was passing a lot of people that had no more run left in them. I think that is where my ultra experience and pacing paid off for me.

With about two miles to go I was getting too warm with the space blanket so I took it off and handed it to a volunteer and began to eagerly await the turn to the finish line. You could hear the cheers and the announcer from about a mile away. I finally made the trun back into town with 7 blocks to go . The streets were still lined with hundreds of spectators and I ran strong soaking in the cheers while I thought about all my friends and family that I knew were still up at 2am at home waiting for me to cross that line and become an Ironman. It was more magical running down that chute past the grandstands than I had imagined and hearing Joey Anderson from Zebulon NC, You Are an IRONMAN !!!!!

From start to finish this was an amazing event. Once I crossed the line I had a personal escort to get me my hat, shirt and medal , and then lead me to food and a massage or whatever else I wanted.

There did seem to be a mistake on the splits for the run time online though. I did slow a little but not 18+ minute miles for the last 4.25. Apparently the mileage was wrong from the last timing mat because it showed even the pros slowing several minutes per mile. I think it was actually 5.25 from there to the finish.
Posted by runjoey at 1:06 AM

Joey, Congratulations on a wonderfully executed event. You are an "Ironman" and you deserve all of the acolades that go with that designation. Your ultra friends are amazed and humbled at your accomplishment. Sounds like there were many prayers answered on your behalf. Congratulations, Rick

Great job! I know what you mean about wanting to get off the bike. I did Ironman races in 2001 & 2002 & DNFed in 2003, but the thing that made me not want to do another... and the thing I remember most about them is that dreaded "I've been on this bike way too long" feeling.