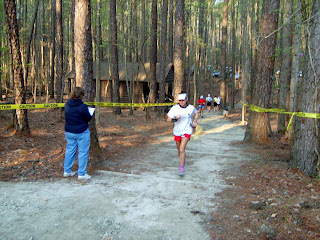 Spring means it's time for the Umstead 100 Mile Endurance Run. It is always a pleasure to help out and be a small part of this most excellent ultra race. Blake and Myra Norwood and their key volunteers and staff put on one of the best ultra runs in the country. It is especially meaningful to me since it is held in my frequent training grounds and was also my first 100 in 2004.

Here are some photos from the race this year

Although I had read about ultras for many years, it was coming out to Umstead in 1998 out of curiosity that I was first exposed to the sport. I ended up hanging around and helping for about 8 hours that year and have been back to the race every year since. Three years ago I decided to volunteer as a pacer and after working at Sally's aid station all day, I was assigned to run with a runner I had never met. I was introduced to Anita Fromm and we headed off into the night for what turned out to be one of my most memorable nights of running. Anita was having a tough time but together we were able to get her to the finish line in what would be a PR for her and the beginning of a great friendship. This year I paced Anita again for the 3rd year in a row and although her 7th lap was tough she ran her 3rd PR in 3 years.
As always, the best thing is seeing so many friends and aquaintences all together for a weekend of running, fun and camraderie. It is especially rewarding to see friends achieve goals and finish their first 50 or 100 miler. The support I received in 2004 for my 1st 100 was so important in making it such a great experience. This year several of the Mangum Track Club ladies, Susan Dummar,Marie Lewis and Laura MacLean showed how tough women can be as they cruised through and got their first finishes. This was Laura's first attempt and she had a very impressive debut running strong in 21 hours+. Nearly as impressive was the great job of pacing her friend and co-worker Alan Hughes provided. Alan had only run one marathon last November and had afterwards discovered he had a stress fracture. After healing and recovery over the winter, he was able to stay with Laura for the last 37.5 miles, his longest run by far. Way to go Alan!
Local lady and NCRC member Jennifer Frahm had a great debut in the 50 miler which I believe was also her first ultra.
Next year poses a dilemma for me. As much as I enjoy helping out and especially running through the night escorting the Trail Princess, I think it's time I challenge myself on the course once again. At this time I plan to be there as an entrant and go for a PR.
Posted by runjoey at 7:20 PM