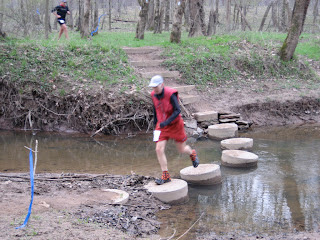 Despite less than a perfect weather forecast, this past Saturday turned out to be a near perfect day for a run through the woods of Northern Virginia. I've posted my report here.

Thanks to Mike Bur for the photo of me crossing the Run and Thanks to Mike Day once again for hosting my favorite running website, NCULTRA

What a great time we live in to be an ultrarunner. So many events within easy driving distance every weekend of the month can make it difficult to choose. However, I had made up my mind a year in advance that I would return to challenge the rolling hills of the Bull Run Run. This would be the 15th year of the race that was the reason for the beginning of the Virginia Happy Trails Running Club. My only previous appearance was in 2005 and I ran 12:15 as I struggled for much of the 2nd half. This year I was hoping for a much stronger performance as I continue to build my fitness for a strong summer.