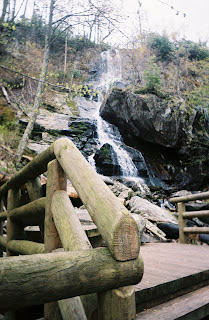 I'll be heading off to the Promise Land 50k this weekend in the Blue Ridge Mountains of Virginia. This is the 7th year for this race, the 2nd in David Horton's Lynchburg Ultra Series. This will be my 5th trip to the race and the 4th time running. I skipped the race in 2005 to taper for Massanutten but I did sweep all of the course except the 1st and last 2.6 miles on the gravel road. Most of that was with Charlie Hesse, one of David's longtime friends and fellow ultrarunner. I took this picture that day of Apple Orchard Falls. I was using a disposable camera that day. I hope to get some better quality photos this year. David says it is the prettiest of his races and few would disagree.
My first time was in 2003.
I was barely ready for a race of this difficulty and had a tough day. My friend Tom Smith and I ran the whole race together that year. Brian Loose was with us for a good part of the day but left us behind about the 20 mile mark. Tom got sick at the 2nd stop at Cornelius Creek. Since we had come that far together I decided to wait and see if he would feel better. After about 5 minutes we began the long steep climb by the falls and back over the parkway. I never knew it was possible for two people to move as slow as we did that day over that mountain. It took us about an hour and a half to cover the 2.8 or 3.4 miles depending on if you believe Horton or the park service sign.
In 2004 I returned just 3 weeks after my first 100 miler and despite being in better shape the lingering fatigue prevented me from improving by more than 7 minutes.
Finally in 2006 I was happy to return in my best shape ever and ready to attack the course. I started off with Fred Dummar and Tony Rouse and before the 1st mile we were drenched to the bone by a freak morning thunderstorm. By the time we hit the trails going up Onion Mt, the trail was a muddy, slippery mess and at times we were running in rivers of ankle deep water rushing down the trails. We slipped and slid our way to Cornelius Creek , about the 16 mile mark when the rain finally stopped. Despite my best efforts I was 10 minutes slower than my previous two attempts at this point. I was disappointed but with two great friends and a beautiful trail I was happy to continue.
Fortunately the 2nd half of the course was in much better shape and I was able to make up a little time. Due to my better condition I was able to make the climb up the Falls trail more than 30 minutes faster than before. Fred fell behind but Tony and I ran to the finish together and despite the slower first half I set a course PR by 32 minutes.
The weather forecast and trail conditions are looking good and I look forward to a new course PR. No matter what, I know I'll have a great time.
Posted by runjoey at 6:46 PM