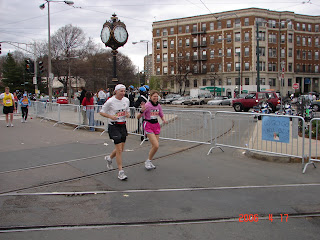 I wrote a post back in late May about it being time to re-focus my training but soon after was the dog attack and slow recovery from the Boogie 100 dnf followed by a miserable heat wave in July. I am happy to report that my training has finally gotten back on track the past couple of weeks and I feel like I am about back to normal but not quite back in the shape I was in the Spring. So, after going over some planning this weekend I officially kicked off The Grand Experiment Part 2  today with a good progression run.

For those newer readers and for you old ones that don't really bother to remember half of what you read here, let me give you a little refresher on the original " Grand Experiment".  In 2005 running in Boston was not even on my radar , having given up on that dream a very long time ago. My fastest marathon, not counting the only one I did as a young man was a 4:12:08 in Richmond in 2004. I met and ran with Karla for the first time on New Years Day of 2005 and also met  Margherita that day too. Karla was training with my friend Jerry for her first marathon and he had asked me to run with them. I was in full ultra mode at this point with a 50k coming up the next weekend and a full slate of ultras on the calendar for the year.

At nearly the last minute I decided I would pace Karla and Jerry in her marathon at Myrtle beach just a week after the Uwharrie 40. She was aiming for a BQ and needed 4 hours. I knew I couldn't run that but I felt I could hold that pace for at least 15 miles and then they could bring it in from there. Well I had a miracle day, pacing them perfectly through 23 miles before I had to drop back and let them go. Karla went on to get her BQ and I came in a short time later in 4:00:40.  A month later Jerry and Margo qualified at Shamrock and at a celebration dinner the 3 of them started trying to talk me into qualifying and going with them. Yeah right. I needed a 3:35 and I had just barely run a 4:01 and besides I was committed to another 10 ultras including two tough 100 milers. No way was that going to happen. But I told them I would give it a shot after Massanutten in May. After that Karla and I begin to train together and to make a long story short I was miraculously able to qualify at MB and go to Boston.  The Grand Experiment of course was could I train to knock a full 25 minutes off my marathon and still run 10 more ultras in the meantime.

Which brings us back to today. I've got 7 months to get myself ready to attempt a 3:34:59 marathon at Tobacco Road in March which would be my PR while still running a 24 hour race next month, a tough 100 miler in Oct. a marathon and a 50k in November and a 50 mile PR attempt in Janurary.  And right now I doubt I could even run one in 4 hours ! It will take a whole lot of hard work , hard running and another miracle for it to happen but I hope that the plan I am working on will give me the desired results. Staying healthy and injury free will be the key so I have to balance the hard work with smart recovery. due to changes in the Boston qualifying standard i have to run faster by a minute than I did  in 2006. Wow, it was hard enough then but to repeat when I'm 7 years older ?

Of course the only reason I am even trying this is to help my training partner and Angel Amy reach her goal of qualifying for Boston. Funny thing is she is not even beginning the training until September but since she is nearly 18 years younger than I am she can catch up quickly.

With the 24 hour run coming up in less than 3 weeks now I can't get too ambitious with the training. I did a progression run this afternoon with the last mile slightly faster than goal marathon pace. For the rest of the month I just want to mostly get in easy miles in prep for a good effort in the 24 and mix in a little bit of pace work, some strides and  maybe a little fartlek to get used to moving at a little faster pace than normal. i am going to try a different approach to the training this time around focusing more on lots of miles at marathon pace and less time on the track.

If there is anyone that can pull this off, his name is Joey! Challenging for sure but I certainly wouldn't bet against you! Good luck!

Thanks for the vote of confidence Frank. Whether I make it or not, the process will be big time fun.