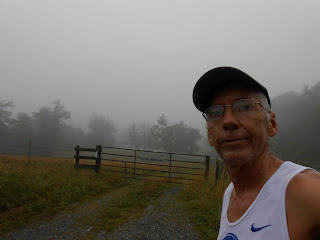 Yes, I am way behind on posting my usual mid-year report on how things have gone so far. I usually have this ready by the end of June but I forgot and then I just didn't feel like writing anything. To be honest I was pretty much in a blue funk for a good while after the dog attack. Although I was eager and able to start back running about a week afterwards,  I was very uncomfortable for several weeks and  I was getting frustrated with my slow recovery. Add to that all the record heat and humidity made for some miserable running most of July. Hugging grand-daughters and running with Angels helped a lot and I finally started getting back to normal a couple of weeks ago.  I've also been very busy at work the past 3 weeks but at least was able to get in some good runs with a few glimmers of hope that when cooler weather finally comes, I'll be ready to race.

So here goes. The year got off to a very good start with  a successful and fun race at the Weymouth Woods 100k which I ran fast enough to get a qualifying time for the Western States lottery this December. Two weeks later I had a good run at the NCFA 50k  on the All American Trail. This one was just a good way to get in a long training run for Umstead and hang out with some cool people.

In February I had a lot of fun at The Pilot Mountain Payback Trail Marathon. The weather was perfect and I felt strong on this beautiful course.


There were no races during March as I prepared for a hundred mile pr attempt at Umstead. The training went very well and I was confident going into the race on March 31st. Warm daytine temperatures and stifling humidity did me in and I fell off pace for the PR after getting a mid race 50 mile PR. The last 3 laps were a struggle but I got a finish in a decent time , 25:52.

Recovery went extremely well and I was back up to normal mileage and training a week later. That gave me confidence to go for a course PR at Promise Land 50K++ at the end of April. I did have a lot of fun but it was obvious after the first couple of aid stations that I wouldn't get the pr. I just haven't been able to train as much on the trails and the steep, long mountain climbs for too long now.

May Madness was the only event the next month which I had planned as fun way to get in some heat training for my upcoming but still secret Boogie 100. The Madness was a great day with a lot of fun with some more cool people, mostly MTC and a few NCRC.

Which brings us to June and the Boogie and the dogs. It was great to have Amy to run with for the first 26 and the support from many friends through out the day was wonderful but everything else was such a disappointment. I was happy to get at least 100K but I paid a high price physically.

As I said the training was a real struggle  for the rest of June and  almost all of July. Combined with the miserable humidity at Grandfather Mountain, I struggled at one of my favorite events.

Looking ahead I have no races planned for August. The training is going much better now and I've had a few really good runs.  The remainder of the year is set now with my next event coming up on Labor Day Weekend. I'll be heading up to Germantown Wisconsin for the Badgerland 24 hour run on the HS track.

In November I'll be returning to the OBX Marathon which I hope to run for fun with Karla. We've run I think 11 marathons together but it has been two years since the last one. I'll finish up the month with my 9th Derby 50k and depending on how things go between now and then I will probably go for a pr once again.  Amy and I are suppose to be beginning to focus our training after my 24 hour run on getting her a Boston Qualifier next Spring so if things are going well with that, I should be in shape to at least consider a 50k pr.

December will just be training and recovery again this year.