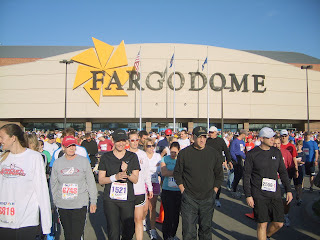 Uff da !! What is wrong with me? That's what I was wondering as I hit the wall at only 9 miles into the race. I had come into the race not expecting to run a real fast time. My plans were to run as much as I could with Margo and just have some fun and maybe run 3:50-3:55 which should be well within my ability right now.

The trip was long but rather uneventful. We flew into Minneapolis with a change in Chicago and there we rented a car. From Minn, we drove to ND, which took about 3:45. Once you leave the city it was very rural with some rolling hills and nothing but huge acres of farmland and woodlands along with many of the 10,000 lakes in the state. As we got closer to ND the hills became smaller and by the time we were about 30 miles away from the border it was table-top flat. We made a quick trip to the FargoDome to pick up our packets and then visited briefly with Wendy and Dan, friends of Margo's from the 50States and DC Club. Then we had a nice salmon dinner at the Timber Lodge. We both had the wild rice soup and it was delicious, almost like having dessert before the meal.

The race didn't start until 8am so we had no problem waking early enough to have plenty of time for the short drive back to the race start in the morning. As we lined up it was a beautiful morning in the upper 40's with only a slight breeze. That would change as the day wore on as there was a high wind advisory for the afternoon. Seems to be normal for all of the plains states.
We started off a bit too far back I think and spent a good amount of time weaving our way through the pack. Still hit the first mile in 9:10 and soon were able to settle in to a decent pace but still had to do some maneuvering around for a couple of more miles.

As we entered the downtown area, being the train lover I am, I quickly spotted the old Great Northern Railway Depot off to the side and snapped this shot. 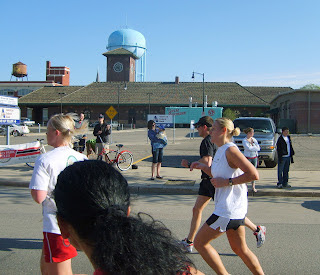 Most of the course so far was very flat of course. The only hills were very small and short and usually at underpasses for roads or RR tracks. I was feeling good and we were clicking off the miles at about 8:30 pace. shortly after 5miles I began to drop behind Margo a little bit and although I felt ok the pace seemed a little strong for me. It was still a little cool but the sun was warming up things quickly. By the time I hit 7 miles I dropped the pace even more and watched as she disappeared in the distance. I was now content to just make it an enjoyable training run at about 9 minute pace and be happy with about 4 hours.

So how did that go? Not too good. Uff Da ! A common term for the northern great plains area and the norwegians that settled in the area. I'll let you look it up here. By 9 miles I had hit the wall and was slowing down fast. I was having a hard time understanding how I could be having this meltdown so early in a run. By 11 miles I was toast and doing the ultra survivor shuffle. If I had not traveled so far I would have taken the short-cut back and dropped at 13 miles. I was really dreading those last15 miles. This was going to be a long slow deathmarch to the end. I passed by a bank and the sign said it was up to 65F and still warming. But the wind was picking up too. At least for now it was not too bad and was helping things to feel cooler.

I resigned myself to the fact that I was having a bad day and just tried to enjoy the race as much as possible. We crossed over the Red River of the North which forms the border of ND and Minn. I took a few pictures along there of the river. We then went onto the campus of Concordia College, on a sidewalk winding through and by the belltower. Just as I passed the tower the bells began to chime 11am. I immediately thought of Metallica's song "For Whom the Bell Tolls" Time marches on ! And then my right hamstring cramped on me big time. I hobbled along trying to stretch it out and a nice lady feeling sorry for me said Sir, are you going to be OK? Yes, thank you I'll be fine in a few minutes. So for the rest of the day I would run until I felt a twinge in the leg and then walk a minute or two. Why not? No hurry now.

Finally I was nearing the end and a good thing too. By now the wind was full force with gust over 40mph that would nearly blow you over. I was really happy to finally get this one over with. I've actually felt better at the end of a couple of my 100 milers than I felt the last half of this marathon.

They really do a great job with the races even if I didn't do a good job of running it. The organization is excellent and the community really supports the race. Many people had set up extra aid along the course in front of their homes and several business too. There were bands at many points as well as some individuals playing in their yards. Several accordion players and polka music along with more mainstream music. As I said before the course is very flat. My only complaint with the course would be the number of turns. Just looking at the map I counted 74 and I know there were several more along the greenways and sidewalks we ran on at times.

If you've never been to North Dakota then maybe this will be your excuse to check it out. Be sure and watch the movie too. Do they really talk that way? Well yes , some do. I overheard a couple of conversations between locals that included a yeah, you betcha in it. Very friendly folks too. We went through some very nice neighborhoods but even the older smaller working class neighborhoods were very neat and well kept.

So, even though my race was a big disappointment,I still had fun and was glad I had the chance to go and share the trip with my great friend Margherita.

Here are the rest of the photos

Sounds like you had a fun time despite the race not going as planned. You have a great attitude and you will do better next time. See you soon.