Garner " A Great Place to Be Running" 5k 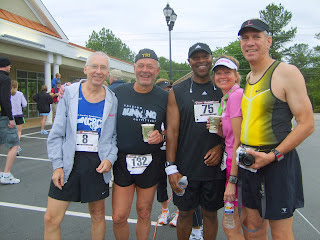 What a difference 2 weeks can make. After the Skirtchaser 5K and my disappointing performance there I decided it was time for a little break from running. Actually I have been uncomfortable running for the past 7 months and my back to back marathons last November. Although I have had a few decent performances since then, overall I have not been too happy with the way things were going. Several massages over the Winter and some stretching seem to help but the pain and discomfort kept coming back. At least the plantar fasciitis has gone away but I needed some rest. So I took a week off completely and then the past week I only ran 3 days for a total of 21 miles.

I was raised in Garner from just after my 8th birthday and my parents still live there so I was happy to have a chance to run a race in my hometown. The last time was at The Warm Winds Welcome 10k back in the early-80s that went right in front of their house at the 4 mile mark. But as the day drew near for this one, I wasn't sure if I should even run due to another mystery pain that came up on my first run after the week off. What's up with that!?!?!
On Thursday,I ran 5 miles on the trails at Umstead and felt great and then I rested the next two days so I decided to go ahead and give it a try. The race would be starting early at 7am so I headed over toward Garner before the sunrise. I was very happy that the weather would be unseasonably cool. After having 88F two weeks ago, the low 50's would be perfect. I quickly checked in and then began to look for friends. Several members of the NCRC Racing team would be there as well as some of the usual suspects. Frank and Karla and Laura, Alan and Jerry and Brad all showed up. After a brief visit with them I headed out for a mile warm-up. I was very happy that the legs felt fine and actually had more zip in them than I can remember when. Hopefully this would be a good sign.
Soon it was time to line up so we headed out into the street. I stood next to Laura but told her I had no plans to try and stay with her today. My goal was to hopefully go back under 23 minutes again and would try for 22:30. The first half-mile was very flat and I quickly settled into a quick but comfortable pace. After the first turn we had a gradual downhill and I started looking for the mile marker. I was hoping with the pace that I would be at least 7 minutes so I was very happy to hit it in 6:45 and be feeling good.
The next mile I tried to just stay relaxed and hold the pace as well as I could. I assumed I'd slow down a little because we would be making up that little bit of downhill. Actually it was a mostly flat course and the slight elevation changes were hardly noticeable and I hit mile two in 6:55. I was still feeling good but the faster pace was not easy to hold. I know I lost concentration and slowed more than I should over the next half mile and then I felt a twinge in my hip. That snapped me back to attention and I focused on not hurting the hip again. Finally we made the turn back onto Aversboro road and the finish was within sight. I pushed strong and although I did slow that last mile, I was able to just dip under 22 minutes and stopped my watch in 21:58. Woohoo! I am very pleased to run that time especially considering the training I've been doing and the nagging injuries I've been dealing with lately.
Laura would end up winning the overall womens race and Karla would place third in her-age-group with a run 3 minutes faster than at Skirtchaser. ( note, the winner of the womens 45-49 age-group was Betty Geiger, the former Betty Springs. She was a world-class runner in the 80's and a favorite in the 1st women's Olympic Trials Marathon in 1984 that Joan Benoit won.)
Tim Meigs and Mark Newton, of the NCRC Team, both over 40 years old ran great races and finished 2nd and 3rd overall.
In spite of my nearly two minutes improvement over two weeks ago, I could only place 4th in the 50 and over age-group. Only 52 seconds separated the top 4.

Here are some more photos

Here are the results
Posted by runjoey at 7:43 PM