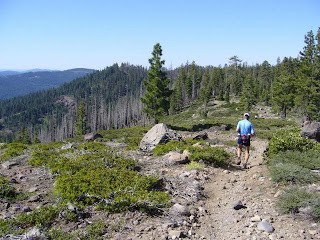 
Currently there are over thirty-five 100 mile races in the US and Canada so why I'm I choosing to go to California and run Western States for my vacation? Some would argue that it's not that big a deal. It is over-hyped, there are other races just a well-organized and less expensive. Other races are more scenic. Others are easier. Others are more of a challenge. Yes, you can argue all those points.
You would have a hard time saying that WS is any better organized than some I have already run. Leadville, Massanutten, Vermont, Umstead, Rocky Raccoon are all superb events with terrific volunteers course marking and aid stations. Even Old Dominion with it's small field and low-key atmosphere was terrific.
Well, if not for Western States, I may have never run any of those other races or even become an ultrarunner. When I began running 30 years ago, I was really not aware of anyone running outside of school track and field teams, the Olympics and the Boston Marathon. I assumed outside of those , the only other people running were a few folks like me trying to get a little fitness. It wasn't until a few months later,September I think that I found an issue of Runner's World at the newstand in North Hills SC. I learned that everyday people like me actually ran in fun runs and there were road races in some cities and towns. I even saw where there was going to be a 10K fun run in Winston-Salem the next March. It sounded like fun to me since I was regularly running 3 miles. Maybe if I trained a little harder I could do that.
But we're talking about ultra's aren't we? Well, in one of those early issues of RW, I saw a report of a 100 mile trail race called the Western States Endurance Run. My first thought was like so many people now when they first hear you say you are running a 100 miles. That's not possible! No way anyone can run that far. See,1977 the year I began running was the first year that WS was held as an official trail race for humans. Gordy Ainsleigh had run the course the first time in 1974 with the horses in the Tevis Cup. Cowman Shirk repeated the feat in 1976 and in 1977 the race was born. Although I could hardly believe what I was reading, I was already thinking that one day I too would run 100 miles and do it in 24 hours. Over the next couple of years I read all I could find on the sport but it took another 25 years before I ran my first ultra. That's another story though. I have now run several 100's and have gone under 24 hours 3 times. That may be much harder at WS. Of course it is for everyone that runs WS since 1986. That year the course was found to be way short of 100 miles and was remeasured now to be 100.2 so all records have been since 1986.
So that is why WS. It was the race that planted the seed that eventually made me what I am today. An ultrarunner. Ultraman Joey. And next week a dream will finally come true. I am very Blessed and fortunate to have the health and ability to do these things that bring such satifaction. In the first year I began running I had three basic goals, break 40 minutes for 10K, run the Boston Marathon and run Western States. Breaking 40 was the easiest and came in 1983. It would not be until 2006 that I was finally able to make the trip to Boston with the help of my friends. (The Boston story) And now I am one week away from #3.

Check out the WS race website here
Posted by runjoey at 5:43 PM