Western States, or how I DNF'd my summer vacation 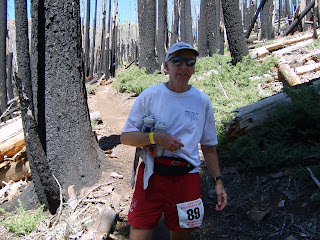 You're a third of the way the safety runner said as he passed me sitting on a rock. A third of what I asked? A third of the way to the top. His words were meant to be encouraging but it actually just let the remaining air out of my already deflating balloon. I had thought I was at least halfway up this climb to Devil's Thumb. I struggled another 100 yards and collapsed yet again onto another rock, heart pounding as my chest heaved to try and gather enough oxygen to recover enough to climb yet again.
My mind was numb. How could this be happening? I had planned so long. My training had been going great. I was setting course PR's all Spring and I had tapered well. But now my race was done. I just had to drag my exhausted body out of this canyon and make it official. Once again I rose to my feet and inched my way slowly forward. Even through the mental fog and the pain, both physical and emotional I had a glimmer of my sense of humor still alive. I had a mental image of myself as Manuel, the Barcelonan Bellman from Fawlty Towers. He had gone out drinking on his birthday and was having the worst hangover imaginable, crawling on the floor. Basil was trying to get him up but Manuel just lies on the floor and says, "no, I die here."That was me trying to make it to the aid station. I just wanted to lie down on the trail and not have to go another step.
I thought of all of my family and friends that were at home tracking me on the webcast. I tried to draw on their energy but it was too late. I think it hurt letting them down as much as anything because they mean so much to me. I finally made it up after sitting at least 10 times on the way. The volunteers tried to coax me onto the scales but I just slowly walked past them, barely able to keep from falling and collapsed into a chair. And it was over. The medical leader came over and asked what was wrong and why I was dropping with 8 minutes left before the cut-off. I could only answer as truthfully as I could at the time, still gasping. "I have nothing left"
I thought there would be tears as he cut off my wristband but instead I felt a combination of relief and confusion. Relief that I would not have to run another step, but confusion as to why.
It would be a couple of days before I finally figured it out. I had no injuries during the run. I did have a couple of cramps but they were not a factor. The conditions were nearly perfect. I had no nausea although at times I didn't feel like putting anything in my stomach. My weight never was more than a pound off my starting weight so what happened?
Early in the race I was taking in plenty of calories but somewhere between Red Star Ridge and Duncan Canyon I began feeling bad. The altitude, dust and terrain may have something to do with it but I normally have a bad spell about that point in my races so I was not too concerned. I knew I was slowing down as I was being passed by quite a few people. I didn't really pay much attention at the aid station to my time and unfortunately I really didn't eat anything. When I got to Robinson Flat, for the first time I realized my pace had dropped below the 30 hour pace. I was really surprised by this thinking I was probably closer to 27 hour pace at this point. I changed my socks and hurried on my way.
This was the true beginning of my downfall. In my preparations, I had not paid any attention to the 30 hr and absolute cut-offs times and was having a hard time getting a grasp of the situation. From that point on I was running scared and unfortunately not eating and re-grouping as I needed to be doing. I did begin to feel a little better on the run down to Miller's Defeat and Dusty Corners but still not eating and trying to make sense of the split times. And even though I felt I had run better over that stretch by the time I got into Last Chance, I was still losing time on the 30 hour pace. It was here at Last Chance (how prophetic a name) that I finished myself off. Had I realized at the time that the cut-offs would be more liberal after Devil's Thumb, I would have taken the time to eat and recover there before heading down into the canyon. But all I could think of was that I had to make up time so I hurried away and sealed my fate.
To finally add insult to injury, two days after I arrived home I was doing my laundry. I emptied the pockets of my shorts from the race and under the extra pair off socks I was carrying were four gels. My heart sank and I felt a wave of nausea. Why had I not realized they were there as I headed down the canyon? If only I had taken them then I may have had enough energy and blood sugar to the brain to think clearly enough to continue.
So what did I learn? It was a great race and a great experience in spite of the dnf. Next time I will do better because I will understand the cut-off times better and will do a better job of taking care of my self. And in my training I will try to make a few more trips to run in the mountains to prepare for the climbs. And next time during the race I will check my pockets.
Posted by runjoey at 5:30 PM

Thank you for sharing your thoughts. I'm impressed that you participated in the WS run. Would it have helped to have a support crew to keep you focused? Are pacers allowed?

Even the best have down days. You may have done everything that you though you should have and still failed. Just happens sometimes. I know your feeling all to well.

Unknown said...
This comment has been removed by a blog administrator.
8:09 PM

A crew would probably have been helpful in keeping me focused and fueled. Pacers are allowed but not until the 62 mile point. I have never used a pacer in my previous six 100 finishes

Sorry to hear about the DNF. I enjoyed reading your post though. I'd like to do WS one of these days, but I need a lot more work to even get as close as you did!

Should've had that "ironman" tune playing in your ear, the one you played for us on the way back to your car near the falls lake dam. That tune has transferable energy.

While you were knocking out long distances, the best i could do was hike a measly 12 miles a day in and around telluride. could have used your tune in lieu of the bluegrass that floated about in that thin air. jeff b

I finally got the Ironman song converted to MP3 and hopefully it will be available for download on the NCRC site soon. Hope you enjoyed the Rockies.

You are the MAN!!!! I know you will finish what you started next year. This is nothing that a little singing wont fix. Go Big

Joey, Sorry it just wasn't your day. After running with you at Mitchell I was pretty sure you were going to do well at Western States. Time to regroup, just don't over train.

See you on the trails!
Stu

So sorry, Joey! I know how hard you trained for this and I know how much it sucks to DNF. Count your blessings, though. You figured out what you did wrong, you knew when to stop, and you came out of it healthy and uninjured. You could have been stupid like me (who can't run at all for at least 3 more months!)

Joey-thanks for shairng. I can tell you were devestated...yet you had such a supportive enthusiastic attitude as you celebrated your friends successes. Great photos!

Joey -
Thanks for sharing your thoughts. I'm sure you're disappointed, but those of us with much less experience can still learn from your post-race analysis. I personally appreciate it because I've seen how strong of a runner you are, and I was reassessing my own potential - "If it could happen to Joey....?!?!?!". It makes sense now though - so thanks.
Tom H.

While reading your post, I experienced a weird sense of deja vu from the 2006 WS100. As I came into Duncan, I was told I was 20 minutes ahead of 30 hour pace, even though I *felt* like I was running on 24-hour pace. That continued (being close to 30-hour pace) until Devil's Thumb, where I was still just 30 minutes ahead of the 30 hour pace. Michigan Bluff and Foresthill yielded a bigger cushion, yet I was close to 30 hours all night long, until I hit the track at Placer High School! So yes, the cut-offs are tight at the front half and at the end, and it's a bummer that they can mess with our heads like that!!

Isn't it amazing how many new lessons we learn at each ultra, no matter how many races we have run? But that's why I love 'em!

Thanks for sharing your story. I hope your disappointment has faded and that you are looking forward to a new adventure soon. WS will always be there and you have the experience of knowing the first 50 miles (and the gist of the cutoffs), so I know the next time you tackle WS, you will have a great day.

I also wanted to thank you for posting your pre-race comments and your photos from the race and the pre-racefestivities. It was awesome to re-live those happy memories!Thank you!

hi you learn more from what doesnt work on the journey.. Way 2 go for going.