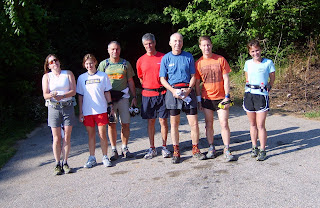 Saturday at 8:35am, 7 trail-running friends headed into the wood for a training run along the length of the Falls Lake Trail in Raleigh NC. The trail is a part of the Mountains to the Sea trail and is 26.7 miles from point to point.( a new 7.2 mile section has been finished recently that was not part of todays run). Several years ago as a beginning ultra-runner I joined a group organized by Matt Kirk and Scott Brockmeirer. I was struggling early on a hot summer morning and dropped after 9.3 miles of suffering. Since that time I have wanted to go back but just never made plans to go through with it.
This Spring as I was planning my training schedule in between the races I was entering I felt that this run would fit into my plans. I mentioned it to Mike Walsh and he was immediately on board and excited so the run was on. We mentioned it at one of the Thursday night NCRC series social runs and Mike Waldvogel and Rhonda Hampton volunteered to be a roving aid station for us. This would solve the logistics problem of worrying about dropping off water and food and provide a sag wagon if anyone ran into trouble. After e-mailing invitations for anyone to join us, we had several sign on and several others that wished they could but had prior commitments.
As the day arrived, we woke to a gorgeous morning with a near perfect weather forecast for our day's little adventure. We gathered at the northern terminus of the trail at 8am and then shuttled to the start at the Falls Lake Dam tailrace area. Besides our aid crew we had( in order l to r in the photo) Bea Kendall, Laura MacLean, Tyler Peek, Jeff Branin, me, Mike Walsh and Dorothy Hunter. All experienced trail runners with at least 2 ultra finishes or more.
We started off easily enough as everyone just planned to have some fun and enjoy the great trail. Mostly we stayed in a tight group early on. Laura always has a problem running slow and would disappear ahead but after a while we would pass her as she stopped to take photos as we passed by. She would repeat that pattern for most of the first half. Mike was feeling great and was leading the pack with Laura early on too.
It was in the mid 50's by the time we started and warming quickly but not a problem as the high for the day would only reach 72. It was quite humid in the early miles making it feel warmer but as the day went on the humidity dropped and a cool breeze picked up making it actually seem cooler in the later miles. Mike and Rhonda were waiting for us as the trail came out of the woods along the roads that cross the trail approximately every 3 to 4 miles. These were always a welcome sight and we would all gather back as a group at these first few stops. We had a large cooler of water, gatorade endurance and an assortment of food that would rival any average race. Especially welcome were the homemade ginger snaps that Dorothy brought. Anyone that has run the Umstead 100 in recent ye 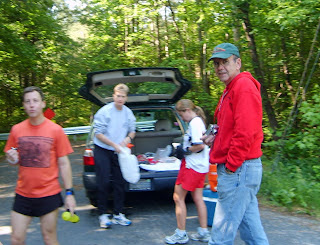 ars would recognize them from the aid station by Ebenezer Church Road. Yummy!
As we neared the midway point I was feeling the effects of last weekends Capon Valley 50K and the other difficult races I've run recently. I wasn't concerned as this was part of the plan. Right now everything is training for WS next month. After next weekends long run I will begin a taper period that should have me in my best shape ever and eager to race hard. But, it was still going to be a tough slow 2nd half today. By now Tyler was feeling good and he soon disappeared up the trail never to be seen again by me. Laura also did a disappearing act after the 17.2 mile stop and Mike went on too. Dorothy was still feeling strong and pulled ahead leaving myself along with Bea and Jeff.
Before we got to the next stop we hit a confusing intersection on the trail and Dorothy was there and would join us for the rest of the run. She would provide one of the most exciting moments of the day. I was leading the group when I heard her let out a cry of pain. Snake bite? No but she was having a major calf cramp like I had post race last week. Very painful. She was making a lot of noise and we were joking that the folks out in their boats on the lake were probably calling 911 thinking she was being attacked. I tried massaging it while she stretched and soon it subsided and fortunately it didn't repeat again. Soon after I took a nice tumble when the side of my foot brushed against a small stump hidden under a new leafy weed. It was a very soft landing as I rolled down the side of the trail. Bea had taken a couple of tumbles too but Jeff, who fell once too would have won best blood. But the good blood he had 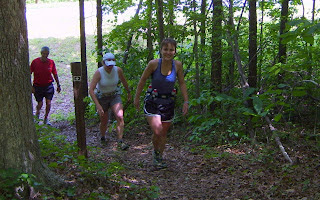 on his arm was not from the fall but from tangling with some briers. Horton would have proud.
We all gathered at the end and savored the moments knowing we had just spent a special day on the trail. Will there be a repeat? You never know. I do know several others are hoping to join us if we do repeat. And then there is that other 7.2 miles to consider.

A detailed course description
Posted by runjoey at 7:38 AM