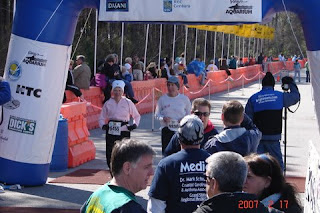 What a difference a year can make. Last year I was approaching this race feeling so much pressure to qualify for Boston while simultaniously worrying about my training partner Karla. This year would be so much more relaxing for me. No pressure, just run with Karla for the fun of it and happy with the knowledge that after a check-up last week, her health would not be a problem. This weekend would be all about fun, friendship and fellowship.
I met over at Jerry's house for the drive down to MB and soon Frank and Karla arrived and we made our way over to the expo for packet pick-up. We saw several familiar faces but before long it was time to head back to the Breakers for a pasta dinner with the NCRC. Thanks to Mark Dowd and his committee for the hard work they did in preparing for it. The food was great and there was enough desserts to fuel an army. After a little socializing , it was off to bed.
Race day morning was cold, around 24F but at least it was calm. Due to a traffic detour we on 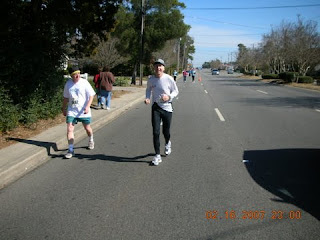 ly arrived at the start a few minutes before the gun. I took a quick look around for Jenn but couldn't see her in the dark and the mass of runners so I went back to line up with Karla. I spotted Richard Lilly of MTC and was speaking to him when the race started surprising us both.
We were quickly able to get into our running pace thanks to a wide starting area. I was dressed more warmly than usual since I was planning an easy pace and not racing. The first few miles as we warmed up were very enjoyable. We were sticking to our pacing plan and I was able to spot many friends and speak to them as they slowly passed us by. There were more than a hundred runners from the Triangle area as well as many MTC members from all around.
We were probably close to 5 miles when Jenn finally caught up to us and began to run with us. We were also joined by the very lovely, young Jennifer Frahm who was training for her first 50 miler at Umstead next month. I was surprised I hadn't seen the Dummars pass us yet. I had been told they were behind us so I was looking back every now and then to see if I could spot a Sasquatch in the crowd. I finally spotted them so I stopped and waited for them. We then ran together for about a mile until we caught back up to Karla and the Jennifers.
Around the 10 mile mark, young Ms. Frahm was pulling ahead and Jenn decided to see what she had left and kick it in to finish the half. Karla was already slowing noticeably and I knew we wouldn't be running her goal time today but she was still feeling OK and we would just do the best we could. I was happy that my little pain from RR was not bothering me at all and would never be a factor for me. We passed the half in 2:28:20 still having a lot of fun.
At the 14 mile split I could sense that she was beginning to struggle a little so I told her we would cut our running time in half and walk more often. She seemed to like that idea. Somewhere along here, George Crump of the MTC recognized me and introduced himself and he was with us for a mile or so before moving ahead. By now it was a beautiful day and we were enjoying the view 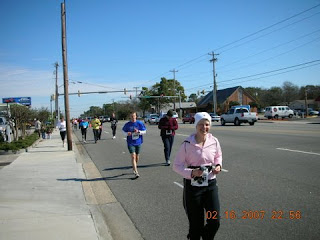 s and admiring the gorgeous homes as we passed through a very nice residential area. We made the climb up "Mt Myrtle" around the 19 mile mark but by mile 20 Karla's energy was fading fast. When we reached mile 22 we just started walking and walked the entire mile. When we turned onto the highway we were facing directly into the wind that had picked up as the morning progressed. I was glad we were still dressed warmly because with the slow pace I wasn't generating much warmth. At mile 23 we resumed a run/walk strategy, but that mile was only a minute faster than just walking so we decided since she was so tired to just walk the last two miles. At this point a few minutes didn't matter to her. She was happy there were only a couple of miles to go so I started singing the "Happy Happy Joy Joy" song to her. I then realized since she had never raised kids before that she was unfamiliar with Ren and Stimpy and other cartoons from the 90's. Having raised two boys , I got to sit through a lot of cartoons so I spent the next two miles telling her all about them and their hero, Powder Toast Man. I also told her about Beavis and Butt-head and this seemed to keep her mind off the pain and soon the finish was in site.
She was glad to get this one over and gather our medals. Frank and Jerry were waiting for us at the finish. After a nice post race massage, we made our way back to the Breakers for some lunch and rest before heading off to the party at The House of Blues. That has grown way too big for the venue and it was impossible to sit and difficult to even make it from one side of the room to the next so we only stayed a short time. At least I got to hang out with the Dummars for a little while before we left and headed to the NCRC party. More good times socializing and sharing stories of the day. A lot of fine performances by a lot of people. A most enjoyable weekend. Now hopefully Karla can get back on a normal training schedule and regain her s 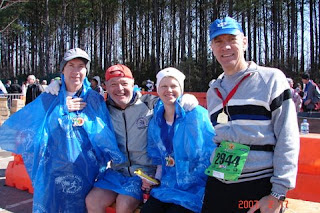 trength and endurance so we can both re-qualify for Boston.
On to the next one.
Posted by runjoey at 3:04 PM