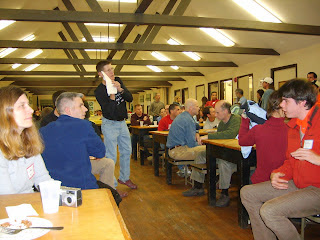 Here is Race Director, David Horton giving out instructions at the pre-race briefing Friday night. I had a great time catching up with lots of ultrarunning friends at the wonderful facility at the 4-H camp where the race is headquartered. This year was the biggest crowd ever with 249 starters.
I stayed in the bunkhouse overnight and then awoke to much colder temperatures than I was expecting. The weather service had the official low in nearby Appomattox at 13F. Lucky for me after the race began I was able to go back in the lodge and drink coffee and stay warm for a while talking with Charlie Hesse and Sue Norwood. The aid station volunteers would have a cold morning standing around waiting on the runners. After an hour or so we started making sandwiches for the turn-around aid station and then went outside to prepare for the first runners. I took a few photos and was planning to take a lot more of the runners coming in on the trail to the turn, but my batteries died on me and I forgot to bring spares. I tried taking the batteries out of my flashlight I had run with at Rocky Raccoon last weekend but they were not strong enough to even turn the camera on. I 've got to be better prepared in the future. Here is a link to the few photos I did get.
As the cut-off time came near, I went inside to warm up and change into my running clothes. Then just a couple of minutes after 10 I joined up with Nathan and Jenny from New Jersey who would be my partners in sweeping the trail for the rest of the day. Luckily it was a very pretty day and the sun was up and shining. I was not dressed for the frigid conditions of the early morning so I was happy to see the temperature rising. It would eventually reach 38f by the time we finished. I was enjoying running the course at a leisurely pace and being able to enjoy the views around the lake. Usually when racing here I have to pay too much attention to the trail and the other runners on the Lakeshore trail. Nathan and Jenny were good company and the run passed quickly. I was happy not to find too much runner litter on the course. We only picked up maybe half-dozen gel packets. There were some styrofoam cups but they were all within site of the aid stations with only one or two exceptions. We did pick up a lot of trash that was not race-related along some of the forest service roads.
We followed the last finisher in just a few minutes past the cut-off and then I changed clothes and enjoyed a delicious chicken lunch and more time socializing. Hopefully someday it will fit my schedule to race here again. I would like beat my best time here before I get too old. The trail conditions were great this year.
Posted by runjoey at 8:43 AM