Yes, not much of  race to report I'm afraid. Things went about like I expected but I had to give it a shot anyway. After 4 years of qualifying, waiting for lotteries and the expense of entering I was determined to do the best I could.


It helps being on Eastern time for these Western races. I was awake at 2:30 am but that is like 5:30 at home and about my normal time to get out of bed so I was in no rush.  I took my time getting everything ready and then hopped in the car for the 45 minute drive to Squaw Valley. I had plenty of time and with no need to warmup so I just took my time to mosey on over to the start. Under the circumstances I was very calm. Either I had a miracle coming and would finish while suffering a world of hurt from the no training of the previous 8 weeks  or I was just in for  a world of hurt. Either way I was prepared for what would  lay ahead of me. 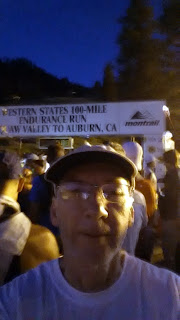 It was much warmer at the start than 2007, probably near 60F already and I was comfortable in just the short sleeves. The gun sounded and off we went up the ski slope service road and I immediately settled in for what I knew would be a long slow 4 miles of climbing. Despite the altitude of 6'000 plus feet I was having no problems on the climb although I think I was going slower than 2007. I didnt even bother looking at my watch. I would get there when I got there. In all that 1st 3.5 miles the course leveled out just enough to run for maybe 3 or 4 minutes total. Near the top I was begining to feel a bit fof the effects of nearing 8,000 ft.  The sunrise behind me over Lake Tahoe was a beautiful sight. 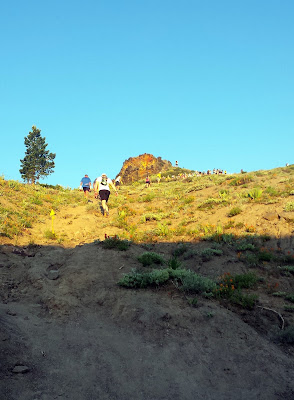 I finally reached the escarpment trail, the last 1/2 mile to the 8,700 ft summit. I remembered it was steep but not THIS steep. The first few hundred yards are a bit ridiculous and combined with the soft dirt I was struggling a bit and my feet kept slipping out from under me as I was nearly on my hands and knees anyway. I was barely going when I fell and my water bottle spout went right into the dirt and I was picking dirt out if it the rest of the day !

After about halfway the gradient eased off quite a bit and I made good time and finally arrived at the top in exactly the time I had predicted of 1:20:00 so that was a good sign. A quick picture and then it was time to see if I was actually going to be able to run as the trail quickly turned down the mountain.
I was very happy that although there was some pain it was manageable and it didn't seem to get any worse after a mile or so. The question stilled remained though , would it hold up for another 95 tough trail miles? And would my out of shape body carry me even if the leg held up? 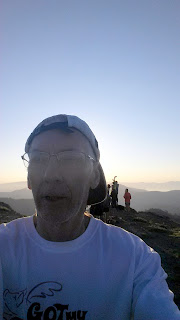 After a mile or so the trail does a lot of up and down. On the elevation chart it shows mostly down but beleve me there is still a lot of climbing in these early miles and they are mostly very steep. And it is almost constant up and down with very little flat. I had passed several people but I was being very cautious. One runner that I was leap frogging with kept telling me to look and enjoy the view but I explained to him that I knew it was gorgeous but I had to keep my eye on the trail and as slow as I was going I didn't not have time to take in the scenery. Perhaps someday I can come and take a slow hike up here because this section through the Granite Chief Wilderness is indeed a beautiful place. 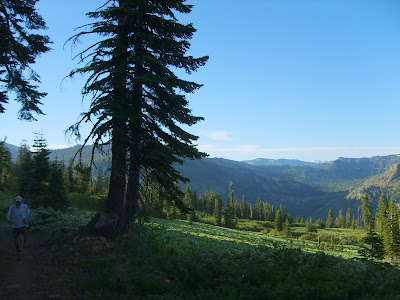 I was still feeling good as we passed through a few sections of ankle deep mud, and a few little creeks and already my mostly white shoes were a mixture of black mud, and grey and brown dust. Suddenly I had a little stumble and right away I could feel the injury and the pain level increased. I really didn't need that and I was begining to worry. Anymore like that and it would definetely be a short day for me.

In this area there were a couple of spots where springs were pouring down the trail and we were basically running through a creek bed. I was being so very cautious when suddenly at only the 8 mile or so point in the race when my lead foot hit a slick spot just at the bottom of of a downhill and it was like hitting ice. The sudden jolt and over extension sent a tearing sensation from the original injury site of the upper hamstring attachment and all the way down the leg to my knee. I yelled out in pain and it nearly made me throw up I was hurting so bad. I just stood there for a couple of minutes trying to gather myself. At this point I didn't even know if I could walk out of here. There is no way to get to you here but by horseback !


I slowly begin to  move. In my heart I knew my race was over but I was finally able to walk  normally and I wasn't quite giving up yet. After a mile or so of walking the pain had eased off a bit and I was able to shuffle some. Amazingly I was able to climb practically pain free but as soon as I tried to run on the flats or downhill I had to shuffle and I couldn't go more than a minute at a time. Not looking good. 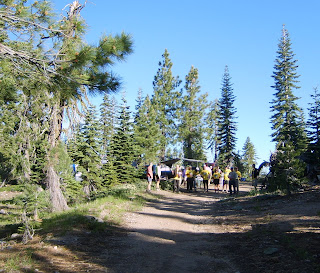 I made it to the first aid station at mile 10.5 under the cuttoff so I was quickly in and out determined to go until I could no longer move. By now I knew I was nearly in last place  but I didn't care as long as I could move and make the cutoffs. Although it was  only 8 am it was already feeling hot and I was now in an area exposed to the sun. I was still climbing well and pain-free but the running was getting slower and more painful soon after leaving Lyon ridge.  I was looking forward to getting to cougar rock but I couldn't recall just how far it was. 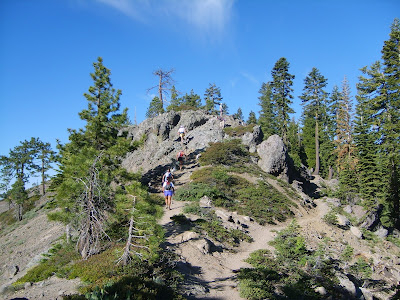 I finally arrived at the rock and  it was as I remembered it. Once I topped out I looked back and could see no one coming behind me although I figured there had to be a few more that hadn't passed me. I kept hoping to see the next aid station but I was nearing the cutoff and nothing in sight.  By now even my shuffle was a struggle and then I heard footsteps and voices coming up quickly behind me. I didn't need to look back to know it was the safety sweeps one of which was former multi year race champion Tim Twietmeyer and then I heard the 10 minute warning horn just ahead.

I couldn't see it yet but I tried running as much as I could but I limped into the aid station with 6 minutes on the cutoff and my heart was broken. They asked me what I wanted and I told them a new leg. They were trying to be helpful but I told them I was done. They of course wanted to encourage me to keep going but when I explained my injury and told them I would have to run the next nearly 7.5 miles in the same time it just took me to cover 5.5 miles and the way the leg was going I would probably never make it anyway. They agreed then that I was being smart and then the medical people took over and wrapped my leg in ice and ace bandage while the aid station captain snipped my wristband off.

Then they left me alone and I allowed myself about 30 seconds of tearing up and self pity. And then I was fine. I came and I gave it my best shot and thats all I could do.


Look for anoother post soon with a bit more about the weekend experience.
Posted by runjoey at 8:01 AM