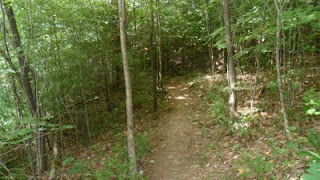 I can't say that I have not ever focused my training on ultra's but in a way I haven't. At least not in the way I'm planning to over the next year. After my first ultra in Feb. 2002 I went back to training for triathlons which had been my main focus for a few years since tearing up my knee playing soccer in 1998. I had entered that ultra more or less on a whim and was only running about 20 miles a week on average and had done two runs over 13 miles in the year leading up to it.

I ran my next ultra in Jan 03 but was still mixing running with tri training. I had a more ambitious plan for the year including the Lynchburg Ultra Series but was basically just using one ultra or marathon as training for the next one. By the time I ran my 1st 50 miler that November I was only averaging 25 miles a week of running and really had no plan.

When 2004 rolled around I was entered in my first 100 at Umstead. The only thing I did specifically for that was to do at least one practice loop on the course each week planning my race strategy to go under 24 hours. Once after my practice lap I walked a second lap just to see how it would feel to walk one. My weekly average in the 6 months leading up to that race was a whopping 29 miles. Really cranking out the miles.

After that I did become a bit more serious and began to lose interest in tri's so I entered more events and increased my mileage to around 45 miles a week over the next few years. The only thing that I did do differently other than add more running was to try and do at least one workout specific to the demands of the next race.

By 2005 I had quit swimming and biking but rather than doing ultra training I was doing a lot of ultra's while beginning to train like a marathoner. That is when I started running with Karla after Massanutten in May. I think I did 10 ultra's that year while doing my long runs like a marathoner and doing twice weekly track workouts on the weeks I wasn't racing. It was hard but I knocked 25 minutes off my marathon pr by 2006 and saw big improvements in my ultra running setting pr's and course pr's all the way through the end of 2007. Of course 2008 was the year of pain and injury as most of you know, 2009 was the return to tri's and Ironman. 2010 to the present was all about Boston training with a return to trackwork, tempo and marathon pace runs. Which brings us up to date.

Now I have decided it is time to get serious and try training specifically as an ultrarunner for the next couple of years and see what happens. No tri training and no marathon training. Details in the next post. Maybe. Stay tuned.

In the meantime , here are some pictures from my "first" long ultra training run last Saturday with The Ultra Angel
Posted by runjoey at 8:40 PM