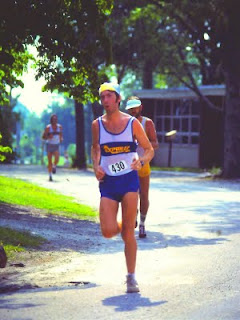 With all the training I'm looking a lot younger and more fit it seems.

Ok, nothing else happening this month so lets look back and see how things have gone so far this year.

Things got off to a pretty good start with a decent time on a terribly windy day at the Ocean Isle Beach Half. That was followed by a faster time on a cold wet miserable day at the Goldsboro Heart and Sole Half. Then things got even better when I finally had some good weather at the American Tobacco Road Half in March and ran better than expected with my fastest time since 2006. It was a bit unusual for me to run 3 half marathons in 3 months. I usually don't run that many in a year but this year I had a different focus than in years past.

After coming off the injuries of 2008 I spent June 08 through June 09 foucsing my training on doing my first Ironman. After that I changed my focus until March 2010 on getting a qualifying time for Boston. From that date to this April everything revolved around Boston so the half marathons fit into my plans. But as I posted in April, all the planning was for naught and for some still inexplicable reason I had a very bad day from the beginning.Oh well. Thats life.

But it was now time to move on and I was already eager to move into a new phase and renew my focus on getting back to doing lots of ultra's again. I jumped in head first with the tough Promise Land 50K++ 5 days after Boston and had a wonderful day running with Jenn, The Ultra Angel. Slow time but I felt great and it just doesn't get much better than a beautiful day on beautiful mountain trails with a beautiful friend.

Had a great trip and a fun time in the inaugural New River Marathon in May. I felt much better than expected and got in some good training. After that I spent the rest of the time getting in some good run/walk training in Umstead and started spending a little more time on single track trails, something I had avoided for most of the past two years with my emphasis on Boston training.

I finished up the last of the competition for the first half of the year with my best Boogie 50 miler. And now it is time to really kick up the ultra running and training as we move into the 2nd half of 2011. I'll have that promised blog post on my training for you soon. Stay Tuned.
Posted by runjoey at 8:42 PM