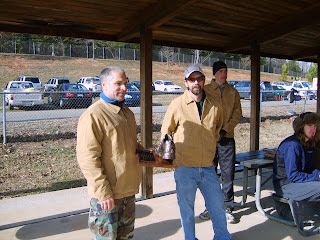 Congratulations to Tyler Peek, the 2007 What's the Point Race Champion. That's Tyler on the left accepting the trophy from last years winner Tony Rouse. Notice both of them and Jay in the background wearing their NC Ultra Series jackets.
Tyler literally ran away with the title this year with no one being close by mid-year. He won by almost 700 points and this was without even running Derby and getting the double points or the 500 point bonus for running all the MTC events. His total of 3,107 was the fifth highest in the competitions 6 year history. If he had just gotten the bonus he would have moved into 3rd. I don't think anyone will ever challenge the Finkles totals from 2004 of 4091 and 4092, and that was without the massive points possible for the Hinson Lake 24hr run that wasn't started until 2006.
Tyler as usual went quietly about winning the title and let his feet do the talking. He is a very good runner and a great all-around person that represents the spirit of the club very well. Not only did he rack up a lot of miles but he did it with some great performances. Tyler doesn't have the typical skinny runners build, no doubt from the requirements of being a Captain in the Durham Fire Dept. One of those quiet heroes that surround us.
I knew from the beginning that I would not be a factor in this years race with my schedule. It looks like last year was my one best shots at it, but in a classic battle to the end, Tony came out on top. I won't be winning this year for sure as I plan to cut back just a little in the number of ultra's and I will have to miss a couple of the MTC events. I will however continue to participate and I encourage all of you that are members of the MTC to join in the fun
Posted by runjoey at 8:30 AM