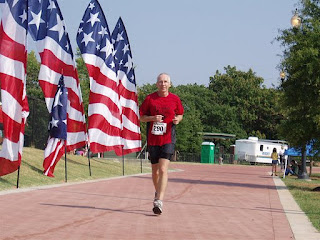 This race was to be a test of my fitness for a Boston Qualifying attempt at Richmond in Nov.
I scored a big fat F minus.
I really wasn't feeling too confident about running strong here and with the forecast for another hot day above normal, I had no illusions of running a fast time. I was just hoping to run a good steady marathon pace and use it as a building block. None of the usual suspects would be running with me today but I was very happy to have the Trail Angel as my traveling companion. I picked Laura up in Garner at 5:30 am and we had a most pleasant drive up to the Virginia border. The trip passed quickly and despite a minor navigational error that caused us to take a tour of the north side of Danville, We arrived safely about an hour before the 8:30 am start. Katie Markley was there waiting for us and we also saw new MTC member Lisa Howell and met her husband Mike. There were also several others from the Triangle area. I was a little surprised to see a few other ultra friends, Brian Clark and family as well as Roanoke residents Jay and Anita Finkle and Neal Jamison.
We headed over for packet pick-up and then went for about a 3/4 mile warmup before making our way to the start. The beginning was on a short ,and not steep hill next to the old Southern Railway Depot. We lined up behind the 5K runners and I made sure I didn't get caught up with them so as not to start too fast. The sun was already beginning to bear down and it was humid.
The half-marathon shared the same course with the 5k on two out and back spurs along city streets and back to the park at the depot. It was a fairly flat and fast first 3 miles with the only hill being a couple of 100 yds long just past the 2 mile point. I was very close to my planned overall pace and feeling good and relaxed as we crossed over a nice abandoned railroad truss bridge to the other side of the Dan River. The rest of the course would be another two out and back spurs on a paved greenway along the river.
My energy seemed to ebb and flow over the next few miles. I felt ok but it was getting hot. I was enjoying the views of the old dams and mill sites along the river and also seeing the other runners as they came back from the turn-around. By the time I hit 6 miles I was already slowing down and I knew it was going to be a tough second half. Fortunatly there was some shade over a good part of the next few miles and although it offered a little relief , my pace continued to deteriorate. We came out of the woods near 9 miles and had to do a loop and back around a big field on a construction site in the sun. By now my race was done and I just hoped to be able to finish at my training pace.
I stopped at the 10 mile aid station and ate a gel and drank two cups of gatorade but even that couldn't help and my pace slowed as I began a rapid meltdown. The last 5k got pretty ugly and I had to take a few short walk breaks in the last two miles . I was glad to get this one over. Everyone seemed to struggle with the heat and humidity but there were still some successes. Laura and Lisa both won their age groups and Katie finished second in hers. The awards ceremony was held in the shade in an ampitheatre so we enjoyed some of the post race pizza and some cold Pepsi Max. Another Pepsi Max for the road assured that Laura and I would be alert and loquacious on the ride back to NC.
Despite the tough conditions, it was a very nice event and I would certainly return in the future if it fits my schedule. I didn't get any photos although I wish I had. If I had known I'd be so slow I would have run with my camera and gotten some nice shots along the river and some of the old railroad buildings. Laura did take a few and you can link to her photo album here.
Posted by runjoey at 8:26 AM