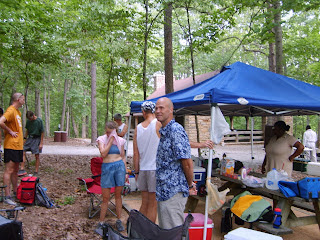 The first (annual?) Sweaty Butt 50K will certainly go down in history as one of the toughest 50K's ever as there was only one runner up to the challenge of the whole distance. And he has to be disqualified because he started two hours before everyone else to avoid the heat. Ok, actually it wasn't that tough. The truth is most of us were just a bunch of wimps.
It was all Mike Day's fault we were out here anyway even thinking of running 50K in 90degree heat and humidity on the tough, rocky , rooty single-track trails at Umstead Park. You can read about that here at Mike's website. Fourteen special idiots I think decided to come out for some summer fun. I had thought about coming out and doing a loop or two but after dropping at WS I've been feeling OK the past week so I arrived with the intentions of running the distance for fun and training. The run was a no fee, no aid, no whiners event but Mike showed up with some nice aid at the start area and had some of his family at the turn-around. The popsicles and ice cream were especially welcome on a hot sticky day.
About 10am Mike sent us on our way and I began to lead the group down towards Crabtree Creek. The Smythes had already run a lap starting around 8am and before long they took the lead with Mike Walsh. We hit the first major climb about 1.5 miles in and I began to walk and several others passed by. We already had sweaty butts as it was already quite warm and muggy and the temperature was rising quickly. I settled in to running with Jeff Branin and Doug Andrews as we took our time enjoying the trail. We made pretty good time coming into the turnaround and I quickly refilled my bottle and was on my way. Jeff picked up the pace since he was only planning on one loop and soon Doug dropped behind. I caught up to Tom Herbst just as we came to the connector to get back on the Company Mill Trail so we ran together back to the start area.
After a delicious lime popsicle I was on my way again. Only 5 of us headed back out for two loops(Andrea had finished her second and stopped) and Brad started his 3rd and final loop. I was by myself this whole lap , feeling Ok but moving slow. I could still feel some lingering fatigue from WS so I didn't want to push the pace. I passed a family on a bridge on the Sycamore trail and 15 feet later I took a fall. I guess I needed an audience. I was surprised that I caught up to the rest of the guys as I approached the turn-around. A cold hose at the water fountain felt very good and I was quickly on my way again. Before long, Mark Long caught up to me and we began to run together. Mark was feeling the heat so we were content to move along slowly. We came to my favorite section, a nice mile long gentle downhill and after running a few minutes I got a side stitch. Mark pulled alongside and we both knew that we would not be going for 3 loops today. From that point on we walked the nearly two miles back to the finish. There was an exciting moment when I wasn't looking and nearly stepped on a snake. I see black snakes out here all the time and think nothing of it but when I looked down and didn't see black, Mark said I levitated as the snake slithered into the underbrush. At first glance it looked like a copperhead. The markings were very similar but on closer inspection we decided it was a water snake. I did an online search and it was a Brown Water Snake. I was very relieved it wasn't poisonous because I would have been bitten for sure.
We finally made it back and there were the rest of the wimps (runners) sitting around. David had taken a shortcut and never finished the 2nd loop and no one else felt like going back out for three. making Brad the only finisher. Tom probably would have gone back out if someone would have gone with him.
So, we had a fun day running in the beautiful forest of Umstead Park. It would have been nice to get a 50K finish but at least I got in a good workout and although I was tired I never felt bad.
Thanks to Mike and his family for making it possible and for the unexpected aid.

I took a few photos here.
Posted by runjoey at 7:23 PM

Joey, bravo to all of you who set out for the 2nd and 3rd tour of the Sycamore and Company Mill trails. One lap was plenty for me.

So Falls Lake trail run in June, Umstead in July, what Triangle Trail would make for the perfect trifecta in August. Those trails over by Wilson Park in Carrboro or perhaps the southern part of the American Tobacco Trail. Or is there another worthy candidate in the area? jeff b

We'll have to give some thought to an August epic in the area. Stay tuned.