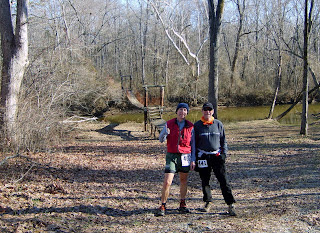 What a gorgeous day for playing in the woods, or even running a trail race. It was a bit cold with the start in the upper 20's and the high probably only in the low 40's if that much, but it was very pleasant for running. The photo to the left shows the race's namesake bridge. The race doesn't actually go over the bridge which is a good thing considering the delapidated condition. When I was there last in 2003 I did cross the bridge but the wood is even more rotted away now. That's my ultra buddy, Mountain Man Graham Zollman. We ran pretty much the whole 35 K together today, but lets go back to the beginning.
After a brief trail briefing from Kevin we were ready to go. I intentionally started in last place on the trail. My intentions were to use this as a long workout and I thought this would help hold my competitive instincts in check. It wasn't long before I was forced to pass a few people that were moving slower than I could handle and then I settled in behind Dean and Sylvana for a few minutes. Things spread out quickly as there were only around 60 entrants for both runs. I spotted Dru Sexton up ahead and after a mile or so I decided to sprint ahead and run with her for a while. Graham had been ahead but took a short break and then he joined up with us as we hit the first big creek crossing. I took several pictures at that point. Go to Photo album here. 6 or 7 runners that had been ahead of us were trying to figure out where the trail was so I took the lead and showed where to cross, then stopped to take the pictures of my friends. Graham took a nice tumble as he hit the bank of the creek where I was standing. I told him to keep his eyes on the trail and ignore the cameraman next time. From that point on, probably the 3 mile mark, Graham and I were together and as everyone pulled ahead we soon had the trail to ourselves the rest of the day. The only time we saw anyone else after that were runners coming back as we approached the turn-around at the bridge, around the 11 mile mark.
Graham was doing the 50K but content to take it easy so we had a good ol' time getting caught up and chatting away the hours. We were both feeling good and commenting how wonderful it was to be doing what we love on such a wonderful day. The return trip was fairly uneventful. There are still a lot of fallen logs over the course. A lot half been cut through and cleared but you still have to climb over or under quite few in each direction. It was going over one of these that I took what probably was the gentlest fall I have ever taken. I was almost over a log when a small branch snagged my left shoe. It was just enough to make me lose my balance. I sat on the log and slipped off onto my back in a bed of soft leaves and sand. Graham stopped and asked if I was ok. Yes, I said, I just thought I'd lie down here for a minute and enjoy looking up at the beautiful sky.

There are a few points on the trail that can be a little tricky to navigate and twice we had to yell for runners we saw ahead going in the wrong direction. Then with barely two miles to go, we found ourselves about to wander into someones backyard. Hmmm, I don't remember going by here. So we backtracked a couple of hundred yards and found we had missed a turn that was immediately after crossing a creek. You can't spend too much time looking at your feet in these things.

I finished up the day in 4:33 and feeling good. I know I made the right decision not to run the whole 50K even though I could have easily set a course PR.

Thanks to Kevin and his volunteers. I know it was cold standing around out there today. I highly recommend this run if you like some nice single-track.
Posted by runjoey at 6:46 PM

I'll have to wait and see how my Boston qualifying is progressing before I can decide on next year. But you will enjoy it I'm sure.