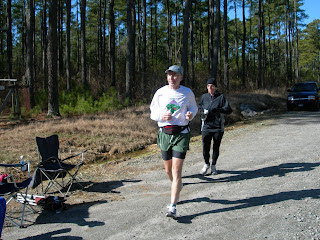 What a glorious morning for a run with some great friends this morning. This was my 6th shirt run and a pleasure as always. I remember when I first started running ultras and trail races, I would see several Mangum Track Club shirts and wonder what it was all about. I finally met a few of the wearers of the shirts and heard about the shirt runs so I made my way down to join the group a few years ago. What I found was a great little run with some of the nicest folks with which to to be associated. Why else would I crawl out of bed at 4am to drive over 2 hours for a run?
I met my friend from the NCRC, Ben Dillon at his home and rode down so Ben could become a member in his first shirt run. It was a very chilly morning, about 28F at the start but it promised to be a much warmer, sunny day. My plan today was to take it easy and get in a nice workout since I'm tapering for a biggie next weekend. I let the folks in more of a hurry take off and then I fell in step with the Ever Lovely Mrs Doom,Susan Dummar and her friend Emily. Emily was a newbie and is training for her first marathon at Myrtle Beach in 3 weeks. Emily was a little quiet but it would be hard for her to get in a word between Susan and I when we get a chance to run together. This was the first time since last summers Boogie that we had to run together so we had a lot to talk about as usual.
I took a short break and Doug and Tony passed by so I ran with them for a little while until we all caught back up with Susan and Emily. After awhile Tony and I had pulled ahead of them and I realized I was getting a little faster than I wanted so I sent Tony on his way and dropped back and spent the rest of the run with the ladies. It warmed up nicely and by the time we finished it was near 60F, perfect for post run socializing and eating. It doesn't get much better than this.

Thanks to Mark Long for organizing the run and welcome to the new members.

ClickHere to a link to some photos I took

Here are some Photos Mike Day took on Flickr
Posted by runjoey at 3:32 PM