Birmingham Wine 10k or back in the lead again.


This was going to be a quick trip and I was glad to get safely off the ground with the strong winds Friday morning. After the rough take off the remainder of the trip was smooth sailing and I made it to Birmingham in plenty of time to head to the Trak Shak for packet pickup and then check out as much of the course as possible, It was a beautiful Spring like day so I went for a nice slow 3 miler on the greenway which would be the last 2.5 miles of the race.

The race was on a point to point route so I parked at the finish area Saturday morning and hopped on the luxury bus for the short shuttle over to the starting park. Just like the Half I ran in Birmingham last November everything about this event was first class. It was  a perfect morning, about 50F and sunny with just a 5mph wind as I began my normal warm up routine. As I was jogging along a local eased by my with a nice comment about the weather. I think that like me he was hoping to size up the competition. He looked familiar but it wasn't until I saw the results afterwards that I figured out why. I had met him at an ultra back in 2003! He was only 55 by the way so not in my age group and he did win his.


ok, back  to the race. I lined up and noticed a couple of faces I remembered from the half that I knew I wouldn't have to worry about but a few unknowns including one white haired guy with a short white beard that looked fit and experienced. Wasn't sure if he was my age  but other than him I was confident I would return to the podium in my 2nd race here. 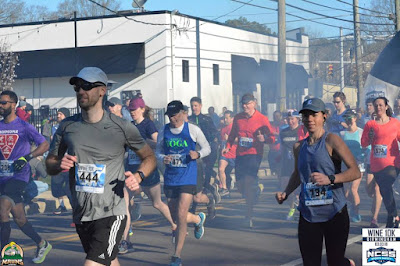 Boom !! They used that loud little cannon again for the start and the first 30 yards were through a cloud of smoke. Once the smoke cleared I could see white beard slowly pulling away and I doubted he was going to run a stupid race and go out too quickly for his fitness so I just hoped I had guessed right about him not being 60. I felt good going up the first small hill and decided I was going to have a good day.

I hadn't seen any of the first 2.5 miles of the course but I knew from the description that it was a bit hilly and it was. My goal was to average 7:30 pace and that's what I was hoping/expecting for mile 1 which did have some uphill but seemed a little more down. I hit that 1st mile in 7:18 which gave me a confidence boost but then mile two made up for things with a lot more uphill. I was a little disappointed that I slowed to a 7:48 2nd mile and just like that my cushion was gone.

Mile 3 was the toughest on the course with a fairly steep qtr mile hill and other than a few short downs it had a slight uphill grade the remainder. That one was a 7:52 so halfway and I'm feeling good with the tough part of the course behind me. Not bad !

There were over 600 runners in the race but nothing really going on around me. I didn't see anyone around that seemed a threat and white beard was out of sight by now so I just focused on running as close to the redline as I dared. Mile 4 would be the fastest on the course with the first qtr mile a really nice downhill I could stretch out on and try to make up some time and then a slight downgrade and flat to Shades Creek and the greenway which we turned onto just before the 4 mile mark . I must say I was little shocked to hit it ion 6:43 Wow, I was pushing that downhill ! Two miles to go, I feel good and I'm going to  achieve my goal pace and beat my time from City of Oaks !

But wait, it sure seems like mostly flat but slightly up stream on the greenway mile 5 is taking a long time. Wait a minute 7:30 and I still don't see a marker. I must have missed it or they didn't have one? Wait, there it is up ahead. Crap, an 8:29 mile 5 !? No way. Obviously they had mistakenly put mile 4 in the wrong spot. I was suspicious because the greenway is marked every qtr mile and I knew how far it was to the finish. I should have known that 6:45 was too good to be true. This was the only fault I had with the event but people make mistakes. At least I knew it was a certified course so it would all come out right in the end despite the head game it caused. Based on the terrain and my effort I would say 4 should have been about 7:20 and 5 about 7:50ish.

The last mile continued on the mostly flat greenway but with 3/4 to go there was a short steep hill and over a bridge that I had run over the day before. It was hard by this point and then another short steep hill up to the 6 mile mark. I was hoping for faster but 7:55 was all I had and it was realistic based on the terrain and the way I felt. Strong but no sprint to the end.  No dry heaves today, The 7:30 pace wasn't going to happen today but 7:38 ain't too shabby. 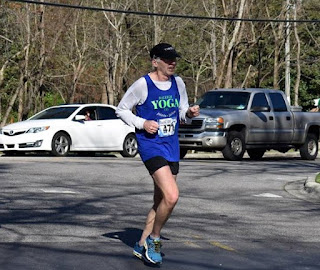 Grabbed my medal and a bottle of water and waled over to the results tent. Boom 1st place Senior Grandmaster. The second pace guy in the series was not here but ran in Myrtle Beach so I  regained the lead by 90 points which pretty much puts it out of reach unless I totally blow up the next two races and I don't expect that will happen. 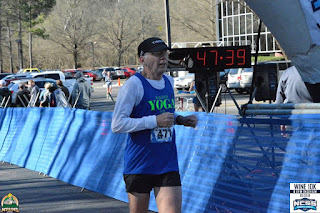 The two men that finished 2nd and 3rd both remembered me and came over to talk about my traveling. I imagine when I'm not around that they usually battle over the age group. They were only 5 seconds apart this time and reversed there finish from the half last November. Nice guys.  I imagine this will be my last trip to Birmingham although I have enjoyed the two races there quite a bit. But its a long way and way too many other things to do over the next few years. 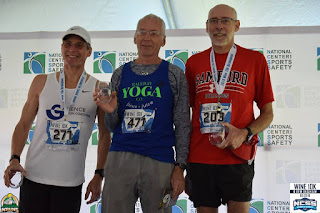 Here is a link to the race website and results are available there
Posted by runjoey at 8:44 PM