A short report for a short race. Most of the whys and wheres in the preview in the previous post.

It was a beautiful cool morning when I arrived for the run. Saw running friends Lone and Charles Matthews while I was picking up my packet. I had no time to waste so I went for a one mile warm up as usual over the first mile of the course. ( the way it was laid out the 1 and 2 mile points were just two blocks from the Start/finish ). It was closer to start time than I had thought so I skipped my usual pre race strides and went to line up. It was a small race with less than 100 starters so no crowding to worry with.

Sized up the competition and only spotted one that may be a threat to my age group aspirations. I got off to a good start and felt good settling into a comfortable but steady pace. The course is mostly flat but we had a downhill and then a climb back up from about 1/4 to the half mile point. Not a difficult climb at all. maybe 15 ft of gain.  A couple of turns and then up and down the same hills but 2 blocks over. I counted between 18 and 20 in front of me as we made the turns.

Still feeling good and steady as we approached the 1 mile mark just before entering Herman Park. Hit that split in 7:27, about dead on what I had planned , just a couple of seconds slower than my predicted pace for the race. I could still see the leaders up ahead so no one was running away with it. I noticed about halfway that I seemed to have backed off the effort a little bit so I kicked it back up a notch as I passed a couple of teenagers that found out they had gone out too fast.

Came up to the 2 mile mark and was happy to see the boost had worked passing it in 7:19. I was also happy that my garmin was dead on all of the races mile markers. One mile to go so I was confident in hitting my goal. I set my sights on trying to reel in a few more runners but most everyone by now was holding steady pace. Back down and up the first hill just before turning to the 1/2 mile to go mark. A quick glance showed exactly what I needed to run that last half in to break 23. I'd lost a couple of seconds but I knew I still had a shot at it. 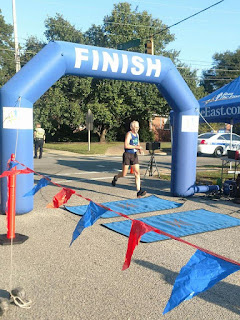 Made the right turn and it was a straight shot to the finish. Downhill and then a climb back up 20 ft to the qtr to go. Flat as a pancake there so I just let it rip. Crossed the line in 22:59, exactly as I had predicted in my preview, Very happy with the progress I have made since the injury that kept me out for 3 months earlier in the year and excited for the upcoming Fall schedule. It's just going to get better and better. Fired off a message to my #1 fan and friend and then went to check the results. Easily 1st Age Group. I didn't find out  until later that there was only one in the age group ! Oh well, I beat all that showed up and all those on the couch too. 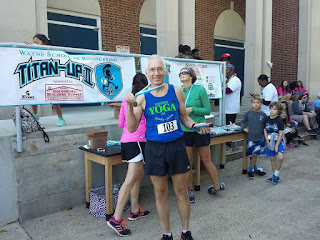 Thanks to my family that showed up to cheer me on and take these pictures !