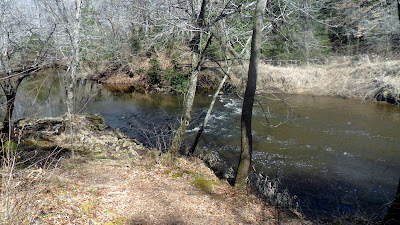 With training going fairly well after Boston I was getting excited to give the Medoc Spring Trail Race go. The race, a 12k on the trails of Medoc Mountain State Park is modeled after the Dipsea race in California with handicapped race start times based on age and gender. If you are interested in more info click on the links provided.

I had run on the course a week before and there was already some mud and standing water in some places and with all the rain up until the day before the course was not runnable as planned with the river out of its banks in much of the low lying areas. The RD and crew did a fine job of coming up with an alternate route allowing the race to go on but the new course although only 6.6 miles instead of the original 7.4 was going to be a bit more difficult with 2 trips up to the summit.

I knew going in this was going to be a real test. I have only been on trails twice since getting injured in April 2015 and there was going to be some serious competition from seasoned trail running specialist. In fact some of the toughest would be starting in my corral including eventual winner Pete Gibson who just the week before set a new USATF State record for the mile in 5:15 ! The race gives awards to the first 50 to cross the line including a hat with your finishing place so I was hoping to get one of those.

It turned out to be a gorgeous morning with upper 50's and not too humid by the 9am start time. I went for a one mile warmup and felt a bit like a slug. Not a good sign normally but somehow I can usually race well when I feel like that ! And so it was.

Once our group started with an 11 minute head start on the young guys  I just let the fast ones go so I wouldn't get caught up in the excitement and go out too hard.The course turns onto the trail after just 50 yards or so and right away was a bit of mud and a short steep uphill. From then on mostly a slight downhill grade with a few slight ups and by 3/4  into it some serious mud and ankle deep standing water. Fortunately it wasn't shoe sucking or really slick so I just splashed through. I was a bit surprised and quite pleased to hit mile 1 in 8:26, a pretty fast pace for me on single track.

The next half mile was more of the same and then we crossed over the bridge and immediately had to wade through mid thigh deep water to get to the summit trail. and then up we went. On the original layout we would have not had to do this climb but oh well. Steep?Yeah. How about 175 feet in 2/10ths of a mile with  bit at a 29% grade with railroad tie steps. Needless to say I walked most of that until it began to level out. The next 1/4 mile is almost flat on an old dirt road. It was dry and fast although still some roots and rocks to look out for. I was very happy to hit mile 2 in 10:11 even with the walking up the mountain !

I had already caught up to several runners but was having a couple pass me and at this point I had no idea what place I was in. All I knew was I was feeling good and had mostly flat and downhill for the next mile so I was pushing the pace as much as I could. Once the trail turned back to single track, even with the mostly down hill, the footing was still pretty tricky with lots of roots and some rocks along this section. Pretty soon the leaders started coming back up so I was counting spots. I passed mile 3 in 8:42. The last bit of trail down to the bottom was a muddy mess but I plowed through as best as I could. The u turn was slick too ! I was in about 25th place at that point.

The next mile including all the mud and climbing back up the mountain was my slowest of the day in 10:45 but as soon as it leveled out a bit I was pushing hard again trying to reel in a couple of runners and hold off as many of the younger guys as possible. Even with the steep downhill I was only able to hit 8:51 but I was really happy with that. I am a lot more cautious now and no way was I going to bomb down that rocky descent.

The next mile was about the flattest overall but it is really constant slight up or down and a whole lot of roots but by now I was feeling at home on the trails and seemed to be back in the groove like I was years ago when I ran trails every week. By now I could see several people ahead and I could hear quite a few behind me and I knew most of them were trying hard to catch me so I was giving it all I could. I passed one more runner right before the 6 mile mark which I ran  in another   8:51.

We began the slight climb away from the river and then made the turn out of the woods onto the grass field. I felt my energy waning on the wet thick grass but I didn't want to give up and let anyone pass me. Volunteers were there counting us as we went by. I was 34th but the next 4 were right on my heels within seconds of me. I was thinking I would lose another 3 spots but I didn't want to give in easily. I noticed I was gaining on a runner about 30 yard ahead so I just focused on catching them and suddenly I had a surge of energy return.

I made the pass and the footsteps behind me seemed to have faded. I hit the pavement with 200 yards to go and just hammered.  Yes, Laura I was making that death sound !   But no one was gong to catch me without suffering ! And they didn't  ! I held all of them off and finished 33rd. One of them came up to me afterwards and said he thought he had me coming out of the woods but then all of a sudden he noticed he wasn't getting any closer and then I was just gone ! Woohoo ! Yes, it feels good to be racing hard and no pain !

This is a really cool race and they do a great job with it. If you like trail racing I highly recommend it. But with that siad, it is back to the roads now with a 10k in two weeks . More on that later

Leading up to the race I hadn't been able to do any real training. Mostly recovering from Boston so most of my runs were just easy and I haven't done anything longer than the 7.5 a week before since Boston.  I only ran 3 six milers the week before the race and then an easy 3 the day after giving me  just 28.6 for the week but that is cool with me.

In addition I was able to get to 3 Bikram hot yoga clased, 2 weight sessions at the gym, one body weight workout and one core workout so overall a very good week.
Posted by runjoey at 9:26 PM