But I was a bit worried there for a little while. Everything had been going great and then the awesome result at the Danville half but I somehow tweaked the bum leg. The good thing was there was no pain in the previously injured area but the lower hamstring and glute were bothering me quite a bit for the next few days. I had rested on Sunday afterwards and only did an easy 4 on Monday but it was uncomfortable and got worse instead of better as I ran. I rested again Tuesday but still hurting.

I was able to get squeezed in to see Kari at Run Raleigh PT on Wednesday thanks to a client cancelling with  her. A painful session but it seemed to help but I rested once again. Thursday I just ran 3 but still a lot of pain. I had a regularly scheduled appt with Stiner massage on Friday and was looking forward to it. That went really well, a bit painful  especially when he was leaning those sharp elbows into the glute. We talked about the race and both agreed that a big part of why things were hurting were due to the series of sharp 180 and 90 degree turns going onto and off the bridge with stops and starts in the last mile after cruising at race pace for the previous 12. I didn't run  that day and although I wanted to I  also rested Saturday.

I was a bit scared to run Sunday but also eager to get back to normal so I went out for a test Sunday morning. I was very happy to have a lot of relief and it seems that the leg was getting back to normal. Only a slight bit of discomfort in the last 2 miles of an easy 6. I ended up with just 11 miles for the week but it was a recovery week anyway.

I rested again on Monday mainly due to having no time working both jobs but that was probably a good thing. I was eager to go on Tuesday and got in a good 6 miler and the leg continued to improve. Another rest/long work day on Wednesday. Thursday was another easy 6 and more improvment.

I told Laura I was ready to give Fun Friday a try. She was awesome as always and said we could just go slow or if I needed to bail just let her know because staying healthy is most important. Things started out well and while we were talking I told her  that besides the pain I just hadn't had any zip since the race so I wasn't expecting much. She insisted if I was hurting to back off.

A normal warmup mile for running with her and then I was going to try a progression starting with 8 and working down to 7:40. Well, I must have been feeling really good because even backing off the next mile was 7:51, oh well lets just go with it. 7:53, 7:46 and 7:41 before I told her I was shutting it down and doing a cooldown mile. I think she was as excited as me at how well the run went and that I felt good doing it. A few minutes later she asked if I wanted to go for the last segment and I just said, depends on how I feel when we get there but I need to get the heart rate down. As usual she is a few steps ahead of me on the return so when I got to the beginning of the segment I just took off and passed her. She was surprised and just said ok then and caught me in just a few strides. Yay I was actually ahead for a couple of seconds. Only missed the segment pr by 4 seconds but my time for the whole 6 mile route was a 17 second pr and no pain ! 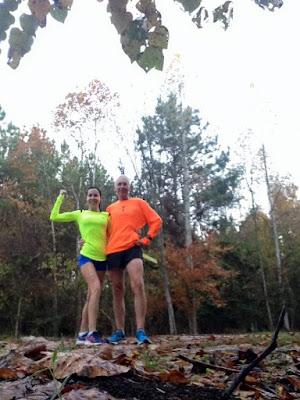 On Saturday I felt better than expected and had a nice 6 miler at home and the leg continued to improve. then on Sunday I drove into Raleigh and parked at Crabtree Mall. From there I ran 12 miles on the greenway during the City of Oaks marathon. It was great to see all the runners and a lot of friends running and volunteering and I had a strong, pain free workout with some hills on house creek.

Ended up with 36 for the week and with continued iomprovement I expect to be back to normal mileage next week. Stay tuned !