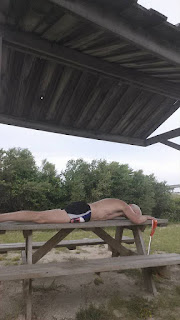 I have to say that I have actually felt better and run at a faster pace the last 4 miles of several of my 50 milers than I did in this one. Too bad it wasn't held on Sunday instead. We had the  temperature about 15 degrees cooler and a low dewpoint making for excellent running compared to anything in several months. I was going to take a rest day but it was so nice I couldn't resist getting in an easy 4 miler. That gave me a total of 39 for the week. I plan to take it fairly easy for most of the upcoming week and then get into some real focused training for racing this Fall. Time to get serious again !
Posted by runjoey at 8:38 PM

Hey Ultra . .ya Forgot to share your finishing time of 2:09:01,its a time I Would Certainly Take . .but Im not"ultra",please Give All The Story!Good Luck,it gets tuffer at 60!I Know!