update on injury and training

It's about time to post the year in review and  the outlook for  2014 but first I thought I would fill you in on whats going on with the training. If you have been a follower at all you are probably aware that I have been struggling with some hamstring  issues since doing something stupid in August which caused my dnf at Beast of Burden 100. Just when I thought I was over it  things got worse during and after the half in Sept. Repeat for Oct and Wineglass marathon, finally going well and then as bad as ever. Took two weeks off hoping to just get through the 50 miler in Pa. later that month but it was hurting just as bad after the two weeks. Then strangely about the 40 mile mark as I posted in the race report, the pain eased off and has now gotten gradually better through the OBX Marathon and then the Derby 50k. How strange is that ? 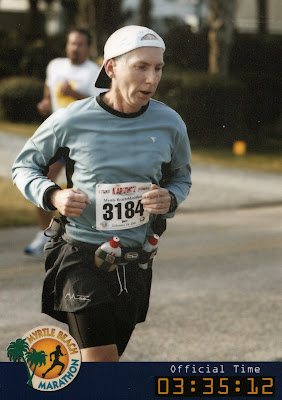 To be honest I was worried and almost planning on taking off the month of December to rest and heal like I did at the end of 2008 when I had a similar injury.  Doing so would not only have made me miserable but my plan of going for a Boston qualifying time at the Myrtle Beach Marathon in February would have been about impossible. Instead, ever since Derby 50K things have been going remarkably well !

I was almost shocked at how great I felt after Derby and was back to training normally almost right away with virtually no pain. I could tell my conditioning was off but it seems to be coming back quickly. In the 3 weeks since then I have been able to get in some good long runs, some strong hilly runs at marathon race pace and nailed a couple of tempo runs at the pace I need.

You may have noticed that I have not raced any events in December for several years for a variety of reasons and I don't have any plans   to race anything between now and MB this time around. I am totally committed to   being in the best shape I can possibly be to go for that BQ. I am not following any specific training plan but just doing the type of workouts and mileage that I know I need to get me in pr shape. And to BQ it is pr or bust for me.

At this time I have just 8 weeks until race day so it's going to be pretty intense training for the next two months so I hope and pray that the body will hold up and I can achieve the goal. It has been about a year and a half since I got into this trying to get my training partner Amy into Boston so this may be our last shot at it for awhile. After MB I am looking at a full schedule of some long ultra's again with at least 3 to 5 events of  100 miles , 24 hr or multiday events with several more shorter ultras so if I don't qualify at MB I don't see another shot for at least another year. 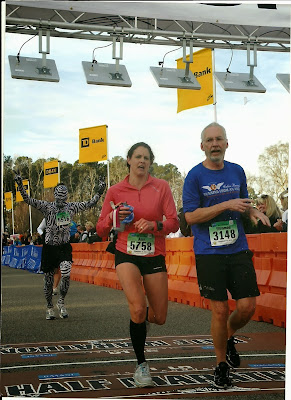 So with that wish me and Amy both good luck over the next 8 weeks.!
Posted by runjoey at 8:17 PM